Rinky Hijikata blogs about his final day in Paris following the Longines Future Tennis Aces event, including a trip to Roland Garros to watch Rafael Nadal. 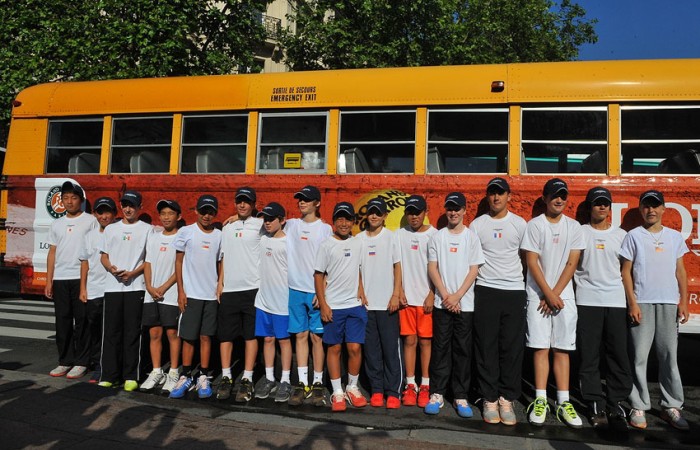 Today was the last day of the tournament in Paris. It’s been an amazing week of great experiences and meeting new friends.

We watched the final of the tournament between Rudolph Molleker of Germany and Carlos Sanchez Jover of Spain. It ended up being a pretty one-sided event with Rudolph winning the final easily 4-1 4-0. I guess this made me feel a little better about my loss to Rudolph in the quarterfinals and I now know the areas I need to work on if I’m going to compete with the best boys in the world.

After the final Fabrice Santoro and Arnaud Clement played some doubles with the two finalists which was fun to watch.

After the final we went to the French Open, which I had been looking forward to all week. When we arrived we had lunch in the Longines tent. It was very impressive but we couldn’t wait to get to Court Philippe Chatrier – but before that we had a tour of Roland Garros.

Afterwards we headed to Court Philippe Chatrier to watch Rafa!! He was playing Fabio Fognini. It was a pretty tough match but Nadal was a little more solid and won in straight sets.

The final part of the trip was a boat cruise and dinner which was really nice and was an opportunity to thank the great staff at Longines for a wonderful week and spend some time with our new friends.

Tomorrow I have an early flight to Hungary where I will meet up with the Australian team to play four more tournaments. I hope the great week I had in Paris prepares me for some good results in the next couple of weeks and I can’t wait to get back to Paris and play at Roland Garros for real.

Thanks for your support