UPDATE: Ashleigh Barty has won her first Grand Slam match with an upset victory over big-hitting Czech Lucie Hradecka at the French Open on Wednesday. 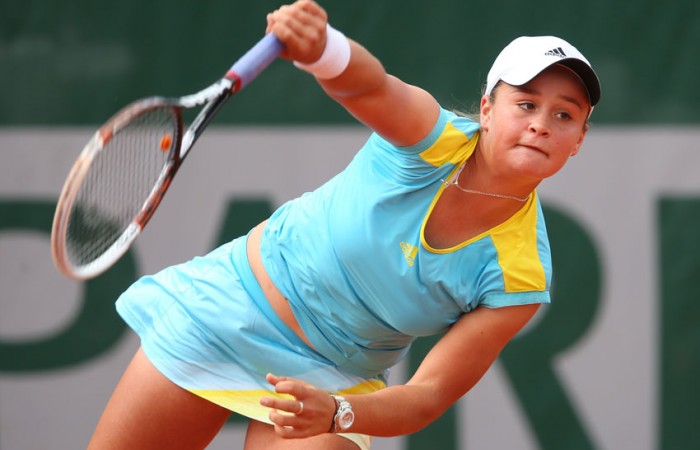 Barty, who only turned 17 last month, overcame world No.82 Hradecka 7-5 2-6 6-1 to set up a second round clash with Russian 12th seed Maria Kirilenko on Thursday.

Barty, ranked 183rd, had yet to win a match in five major outings. But she put the experience gained to great use in Wednesday’s match, which had been held over by a day due to a rain delay.

“It was nice to get across the line. It was a bit of an up and down match but Lucie played a great second set,” Barty said.

“I’m into the the second round and it’s really exciting.”

Barty said she felt relief more than anything after her breakthrough win but had to be told she was facing Kirilenko in the second round.

“Is that who I play? I haven’t even looked at the draw,” she said.

“Obviously she likes playing on the clay but I haven’t even thought about it. Let’s be honest, I’ve never made it to a second round before so I wasn’t sure if it was worth (checking the draw).”

It had been a case of missed opportunities in the first set before Barty eventually clinched it.

Both players traded breaks for most of the set and the Australian wasted a handful of game point opportunities to build a two-game buffer.

However, she kept focused and took the advantage when she converted her fifth set point on Hradecka’s serve.

Hradecka lifted her game in the second but the third set was all Barty.

She nullified the Czech’s power with smart play and she raced to the biggest victory of her career, pumping her first in delight.

Barty came into the event feeling more comfortable in her surroundings and hopeful of making an impact with the benefit of a full Grand Slam cycle under her belt.

She also took plenty of confidence from an excellent Fed Cup victory over world No.58 Stefanie Voegele on clay in Switzerland last month.