Sam Stosur and Ash Barty will be out to keep Australian hopes alive at the French Open on Thursday. 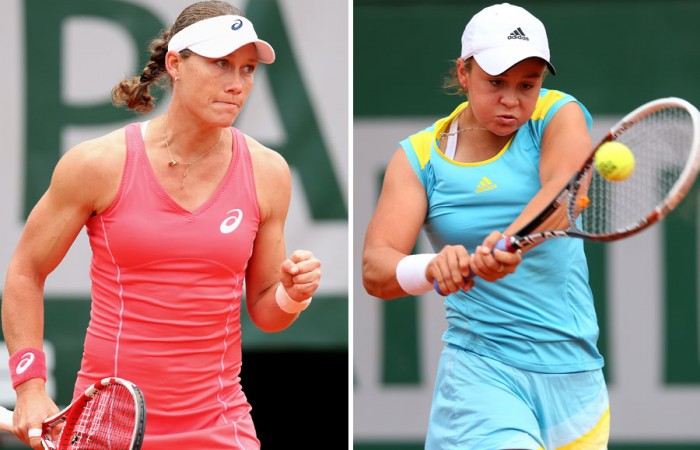 Sam Stosur and Ash Barty will be out to keep Australian hopes alive at the French Open on Thursday.

They are the only Australians left in the singles at Roland Garros after teenager Nick Kyrgios suffered a second-round defeat to Croatian 10th seed Marin Cilic on Wednesday.

Barty, who recently turned 17, reached the second round of a Grand Slam for the first time with an upset 7-5 2-6 6-1 win over Czech Lucie Hradecka.

She became the 12th youngest Australian woman to win a Grand Slam match in the Open Era and will next meet Russian 12th seed Maria Kirilenko.

Barty put her previous major experience gained to great use against 87th-ranked Hradecka in a match that had been held over by a day due to a rain delay, saying she’d benefited from a tough initiation at last year’s French Open against Petra Kvitova.

“Last year playing Petra, it was obviously a bit of David and Goliath maybe,” Barty said.

“I was happy to go out there today and I knew that I could win. I just wanted to execute my game plan and do what I do.”

Aussies in action on Day 5