For all the pressure that must have been weighing on Bernard Tomic's 20-year-old shoulders at the French Open on Tuesday, he did an admirable job of carrying it. 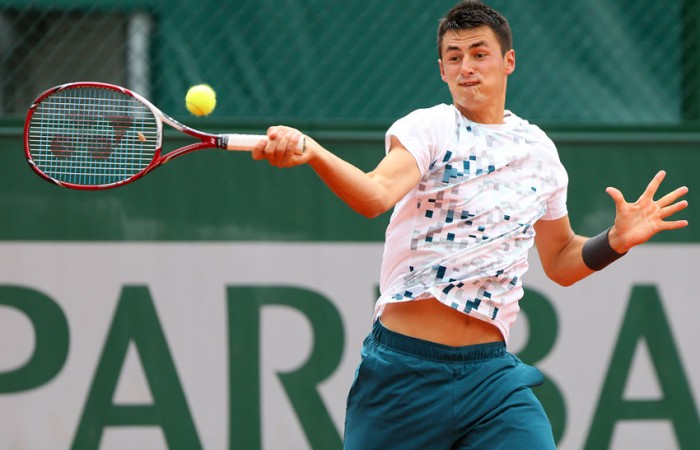 For all the pressure that must have been weighing on Bernard Tomic’s 20-year-old shoulders at the French Open on Tuesday, he did an admirable job of carrying it.

Returning to the tennis court – his natural environment – for the first time since his father John was charged with assault was the easy part.

Facing the international media afterwards would have been daunting for a player of any age.

Having not spoken publicly since his dad was charged with assaulting his former training partner, Frenchman Thomas Drouet, in Madrid on 4 May, Tomic’s post-match press conference was one of the most anticipated of the week.

It attracted an attendance usually reserved only for the likes of Roger Federer, Rafael Nadal, Novak Djokovic or Serena Williams.

Given the intense media focus and sensitive subject matter, there was some suggestion the world No.61 could even opt to skip his interview and cop the fine for doing so.

But – surely in the knowledge the media storm surrounding his father would only continue to follow him throughout the season – he fronted up soon after retiring hurt in his first round match against Romanian Victor Hanescu.

Unlike with Djokovic, who last week had a press representative request he answer “only questions about his first round opponent, nothing else to do with the draw”, Tomic did the talking himself, politely asking for understanding.

“You know, I’d like to say some things before you guys ask me about them, obviously involving my father.

“Involving the incidents that happened, I don’t want to talk about it a lot – or at all, I should say. And it’s a very difficult thing for me, you know, to put my words into that.

“If you can respect all I have to say about this, I’m happy to talk about the match.”

The line of questioning went well beyond the match but he was not pushed further on the incident, or Drouet’s claims that he’d seen John Tomic hit his son, as there seemed to be a degree of sympathy for his situation that has been shared by supporters and fellow tour players at Roland Garros this week.

After a testy relationship with the media in the past and warranted criticisms of his attitude on and off-court, he appeared to have turned the corner earlier this year.

Some will question his withdrawal in Tuesday’s match, though others will note he pushed on and fought hard for two sets after picking up the injury.

And his handling of a tricky situation afterwards could be further evidence the boy once branded the brat of Australian tennis is growing up.