UPDATE: Sam Stosur has opened her 2013 French Open campaign in style, romping to a 6-0 6-2 victory over Japan's Kimiko Date-Krumm on Tuesday. 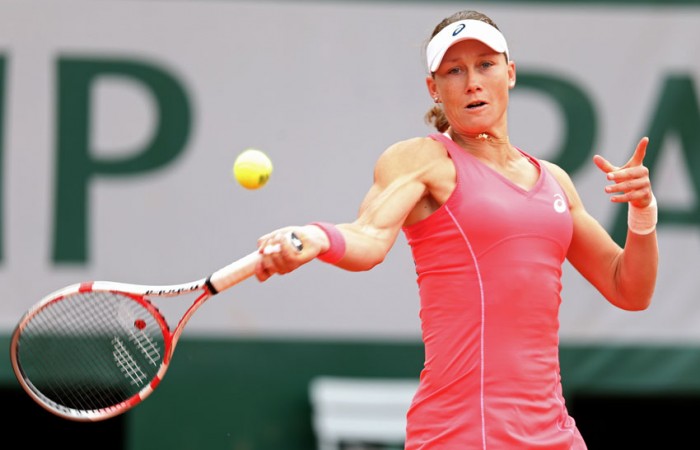 Sam Stosur blasted her way into the French Open second round with a 6-0 6-2 demolition of Japanese veteran Kimiko Date-Krumm on Tuesday.

The Australian ninth seed needed little more than an hour to power to victory against her 42-year-old opponent to ensure a superb start at Roland Garros, her favourite Grand Slam event.

Stosur will face Kristina Mladenovic in the second round on Thursday, who beat American Lauren Davis 6-0 7-5.

The match started more than two hours late after persistent rain delayed the start of play on day three of the claycourt major.

With light rain still falling after the covers came off, Stosur clearly wanted to minimise her time on court and she showed Date-Krumm no mercy from the outset.

The Japanese had no answer for Stosur’s power and aggression and the first set was over in just 21 minutes.

Date-Krumm, who had not played a match on clay at the top level since last year’s French Open, offered more fight in the second set.

But Stosur sealed a dominant win when she broke Date-Krumm to love in the final game.

The Australian, a runner-up and twice a semifinalist at Roland Garros, is targeting a return to form in Paris after a frustrating year marred by injury and form concerns.

“I was very pleased with the way I played and the way I started the match,” Stosur said.

“Then, the start of that second set to be able to keep going and really not allow her to feel like she could get into it. I was very pleased with that aspect. I was very happy.”

Date-Krumm, who won the Strasbourg doubles title last week, is the third-oldest woman to play in the French Open.

When she made her Roland Garros debut in 1989, nearly half the players in this year’s women’s draw had not been born.

She’s more focused on the upcoming grasscourt season and was happy to get through the match unscathed.

“Of course I’m disappointed but I don’t get the injury today,” she said.