UPDATE: Rinky Hijikata will represent Australia at the upcoming Longines Future Tennis Aces tournament, and blogs about his experiences so far in Paris. In his blog, he recounts his travels from Budapest to Paris, sight-seeing in the French capital, and preparing for the event on clay.

Having already spent three weeks in Europe with the Tennis Australia team, we travel to Hungary from Slovenia and I spend the night in a place call Pecs while the rest of the team prepare to play a Grade Two ET event.

My coach Ben has travelled from Australia to spend the week with me in Paris at the Longines Future Tennis Aces tournament; he looks pretty tired but we are both looking forward to getting to Paris and mixing it with the best 12 and 13-year-olds in the world. 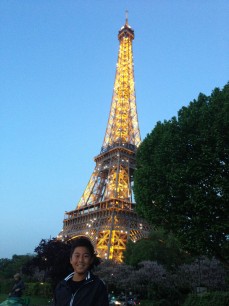 We spend the night in Budapest; the weather has been terrible since I arrived in Hungary and it’s still raining when I wake up. Ben and I meet for breakfast and have a shuttle take us to the Budapest International Airport. We check in but I learn the hard way that we can only travel with one bag and get charged 70 euros for my tennis bag. Our flight is easy and we arrive in Paris. Longines has organised a car to pick us up. A man in a black suit meets us and take us to “limo”; the car was really cool and we felt a little like rock stars.

We arrive in Paris at our hotel The Mercure Eiffel Tower. We check in and head straight to the Eiffel Tower; as we don’t hit today we try to fit in as much sight-seeing as possible. The lines to climb the Eiffel Tower are massive but I’m really looking forward to getting to the top … We climb all the way to the second level and the view of Paris is great. We then join another long line to get in the lift to the top, but the eventual view from the top is worth it. 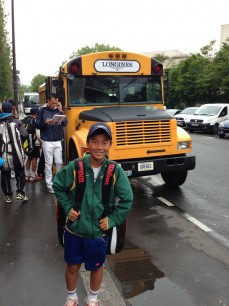 I meet Ben down in the lobby of the hotel. It’s a busy morning as I have to do two interviews on the phone – one with Take 5 magazine and the other with a radio station. We then have breakfast and meet to take the old-fashioned school bus to the Longines Tennis Academy.

The club is great and has seven indoor clay courts. We are training with two French coaches for the next two days before the tournament starts.

Today we mainly get used to the clay courts, as some of the players had never played on it before, and in the afternoon we play points.