Sam Stosur, Bernard Tomic and Ash Barty will take to the Parisian clay on Tuesday as the first round wraps up at Roland Garros. 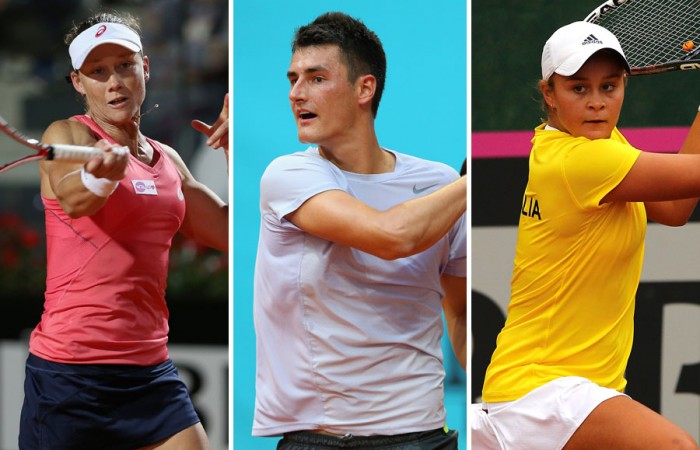 Following Nick Kyrgios’ thrilling first round win at Roland Garros on Monday, three more Aussies will aim to follow in his footsteps on Tuesday as the opening round comes to a close.

Sam Stosur, Bernard Tomic and Ash Barty will take to the Parisian clay on Day 3, each with winnable matches ahead of them.

Opening proceedings on the famous “bull-ring” No.1 court at Roland Garros, Stosur takes on 42-year-old Japanese Kimiko Date-Krumm, who incredibly reached the French Open semifinals back in 1995.

Although Date-Krumm is a wily veteran with tricky game to combat, the No.9 seed will fancy her chances and will attempt to progress to the second round in Paris for the seventh straight year.

Tomic returns to action for the first time since Madrid, and although clay is not his favoured surface, he finds himself up against unseeded Romanian Victor Hanescu, ranked No.54 to Tomic’s No.61.

Tomic will return to court later in the day to team with South Africa’s Kevin Anderson in the men’s doubles.

Later on Tuesday, Barty will make her second appearance in the women’s singles at Roland Garros after debuting against Petra Kvitova in 2012.

And this year, the young Aussie takes on another big-hitting Czech in the form of Lucie Hradecka, although unlike Kvitova who was seeded fourth last year, Hradecka is an unseeded foe.