Stosur: I can be a French title threat

Despite form and fitness struggles in 2013, Sam Stosur's belief in making another serious run at the French Open title remains as strong as ever. 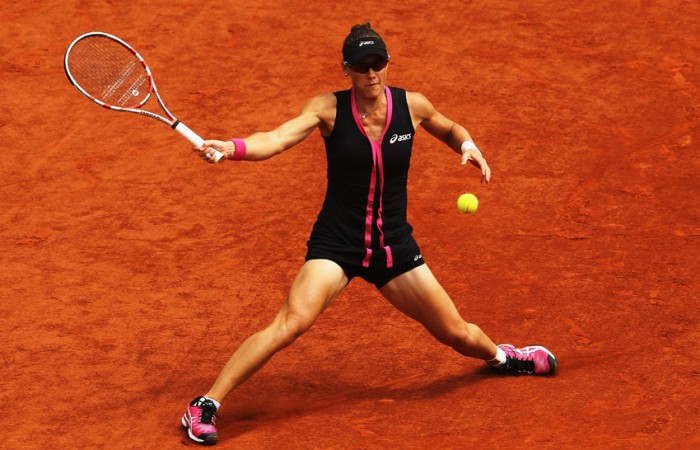 For all her struggles with form and fitness in 2013, Sam Stosur’s belief in making another serious run at the French Open title remains as strong as ever.

The red clay of Roland Garros just has that effect on Australian tennis’s leading light.

Stosur heads into her 40th Grand Slam event, starting on Sunday, on the back of statistically her worst start to a season since 2009.

And, despite her impressive record in Paris, it means few are talking her up as a genuine title threat to almighty world No.1 Serena Williams.

Stosur admits it’s been far from an ideal build-up, but her affinity for the claycourt Grand Slam has her thinking anything is possible.

“I’m certainly not writing myself off and I’m not going to say I’m the favourite either,” Stosur told AAP.

“But I love playing at Roland Garros and it’s the tournament where I’ve had my best results.

“I don’t see why this year couldn’t be any different if I keep doing the right things.”

While Stosur’s major breakthrough came at the 2011 US Open, it’s in Paris where she’s proved a consistent threat.

A semifinalist in 2009 and runner-up the following year, she again reached the final four in 2012 before a frustrating loss to outsider Sara Errani.

Stosur took stronger form and more match practice into last year’s event – she had a 21-10 win-loss record compared to 14-10 this year.

But form hasn’t always been a pre-cursor to French Open success as her performance in 2009 on the back of a 10-9 start to the season illustrated.

Confident a lingering calf injury is now behind her, Stosur took plenty of encouragement from a strong showing at last week’s Rome Masters, where she beat a fellow top ten player, Petra Kvitova, for the first time ever.

Still, the 29-year-old knows she’ll need to find a new level altogether if she’s to get near Williams, unbeaten in four straight tournaments and 24 matches.

“She’s back to number one where she belongs and deserves to be,” Stosur said of Williams, who she defeated in the 2011 US Open final.

“She’s definitely the in-form player but she’d be the first one to say you can’t get ahead of yourself because we’re all hungry and want to (win) as well.

“Everyone starts from the first round again and it’s going to be really tough so I have to make sure I’m diligent with everything I’m doing and try and keep this recent good form going.”