Tennis tips: one hand or two?

There’s no denying that the single-handed backhand is a thing of beauty but it’s becoming scarcer at ATP/WTA level. So should you play with one hand or two? 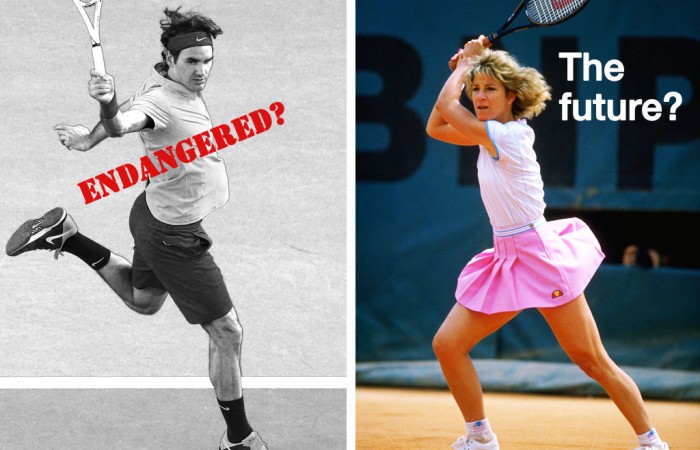 What is it about the one-handed backhand that makes people swoon? “I think from the fans’ point of view, the shot looks more free and somewhat more flowing than the double hander, which is more compact,” says Noel Callaghan, a Tennis Australia High Performance coach who has worked with Sam Stosur.

“The single hander allows a longer backswing and follow through which the fans would see as a little more artistic.”

Wally Masur, former Australian Davis Cup coach, agrees with the long flowing swing theory and adds, “the big shoulder turn followed by a swing path that needs to stay on the ball for a while to generate pace is aesthetically pleasing.”

Evolution of the double-handed backhand

As the game changed throughout the years, two-handed backhands really came into vogue when Chris Evert and Bjorn Borg were the stars of the tennis boom of the 1970s. This produced a generation of players that hit the tour using two hands instead of one, leading to a steady decline in the number of one-handers.

Nowadays with the vast majority of pros hitting two-handers, they seem to be gaining the ascendency over their one-handed counterparts.

Why two may be better than one

“I think the two-handers have a big advantage on return. To have a great topspin backhand you need a strong grip, which means big changes from the forehand and that can be tough when the serve is coming at you over 200 km/h,” points out Masur.

“Also, balls above the shoulder are problematic. [Roger] Federer’s Achilles heel against [Rafael] Nadal is that backhand above the shoulder, [Novak] Djokovic in contrast has no such problems with two hands on the racquet … the left hand provides so much more strength.”

The single-hander has benefits too

Versatility, reach and spin are the weapons the one-handed backhand brings to the fight.

For the social level player, the single-handed backhand can be a difficult stroke to master, particularly given that it often detracts from power. However if you’re aiming to achieve a game that’s based on feel, it’s worth experimenting with a one-handed backhand in practice.

Is the one-hander an endangered species?

Could there be a day where this domination completely spreads throughout the pro tour, ultimately leading to the total disappearance of the much-loved one-hander?

“No,” says Masur. “The double hander prevails already but in recent years maybe the two best in [Pete] Sampras and Federer had the one-hander. There will always be a couple of single handers around the top but not many.”

So, one hand or two?

“I would encourage the two-hander,” says Masur, “With a strong emphasis in the early years of developing a strong slice leading to a strong backhand volley. With the new strings serves are getting bigger, players are hitting with more spin, I think two hands will be advantageous.”