Stosur falls to Azarenka in Rome

Sam Stosur has fallen in three tough sets to Victoria Azarenka in the quarterfinals of the Internazionale BNL d'Italia in Rome on Friday. 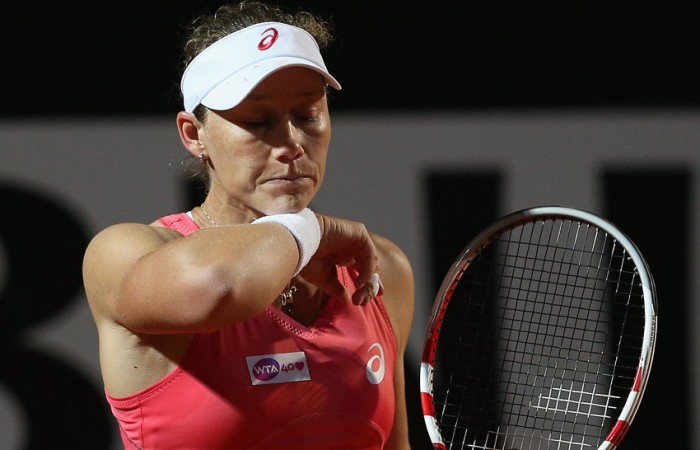 Sam Stosur has fallen in three tough sets to Victoria Azarenka in the quarterfinals of the Internazionale BNL d’Italia in Rome on Friday.

The Australian, who had never previously beaten Azarenka, saw her record drop to 0-8 after the latest defeat.

Azarenka, the third seed in Rome, won 6-4 1-6 6-3 to progress to the semifinals, where she will meet local favourite Sara Errani.

Errani was given a free passage into the final four after two-time defending champion Maria Sharapova withdrew prior to the match with a viral illness.

Stosur battled Azarenka for two hours at the Foro Italico’s court Centrale, and was actually superior in many departments on the stats sheet, winning a higher percentage of first serve points and watching as the Belarusian dished up an unsightly eight double faults.

But she was unable to capitalise on her advantages – she lead 2-3 0-40 in the opening set before dropping serve in the ninth game to lose it, and broke Azarenka in the opening game of the third set to take an immediate advantage.

She also had three break points in the final game of the match which would have gotten the third set back on serve, but was unable to convert.

“Overall I’m pretty happy with the way I played,” Stosur wrote in her blog on wtatennis.com.

“The best thing for me was probably my return of serve. She places her serve very well and I was able to return very well most of the match. What let me down was probably my serve when it mattered, and that’s tough because in a match that close sometimes it comes down to just a few important moments.”

Stosur’s next event will be the French Open at Roland Garros; after a couple of days off, she plans to head to Paris on Wednesday to continue her preparations for the year’s biggest claycourt event.

The French Open begins on Sunday 26 May.