After scoring two wins to help Australia defeat Switzerland in Fed Cup, Sam Stosur is confident in both her form and health as she embarks on her claycourt season. 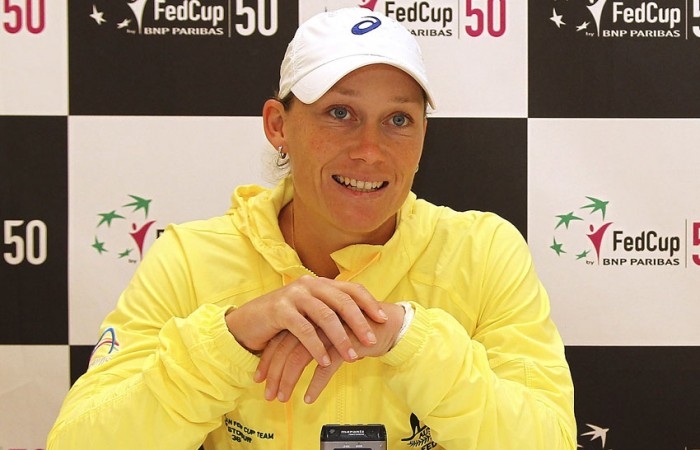 After scoring two wins in the space of three-and-a-half hours to help Australia defeat Switzerland in Fed Cup, Sam Stosur is confident in both her form and health as she embarks on the remainder of her claycourt preparation leading into the French Open.

Stosur’s season has since March been disrupted by a right calf injury, but despite not having played much competitive tennis in that time, the world No.9 showed her game was still sharp as she dismantled her Swiss opposition.

On the red clay of Tennis Club Chiasso, Stosur brushed aside Stefanie Voegele 6-0 6-4 before claiming a gritty 7-5 6-3 victory over top Swiss Romina Oprandi, the latter result sealing a 3-1 victory for Australia.

> check out images of Stosur in action

“I probably would have preferred not to play two matches in one day considering I haven’t played a competitive match in quite a while given what’s been going on (with my calf), but I have to say I’m very pleased with the way that I came out and played both of them,” Stosur reflected.

“I thought I played well, and nice to get it done in two straight sets.”

Most encouragingly, Stosur said she felt no pain in her calf, despite the heavy strapping on the muscle extending from her ankle up to her knee.

“I didn’t feel anything wrong or bad happen out there, so that’s very pleasing,” she said.

“I think when you play, in my situation, after being injured you’re always a little bit hesitant, but to get through that with no problems is very pleasing.”

Stosur’s attention now turns to her preparations for Roland Garros, a period of the season that has in the past few years been her most productive and enjoyable.

The Aussie is the No.6 seed at the WTA Premier event in Stuttgart, and will face resurgent Serb Jelena Jankovic in the first round.

She will then contest events in Madrid and Rome before heading to Paris for the French Open, beginning 26 May.

“It is a little bit of a strange feeling still being here on Monday and now playing, and you know that tournament (Stuttgart) has begun,” she said, referring to the rain delays that pushed the Fed Cup tie to a third day in Chiasso.

“My coach is there (already in Stuttgart), and everyone for me is already there … but I’ll fly there tonight and have one day there tomorrow to prepare and I guess it’s just one of those things – you can’t plan for this but you’ve just got to deal with it as best you can.”

Stosur is scheduled to face Jankovic on Wednesday at the indoor event on red clay, at which she reached the quarterfinals last year and the final in 2010.