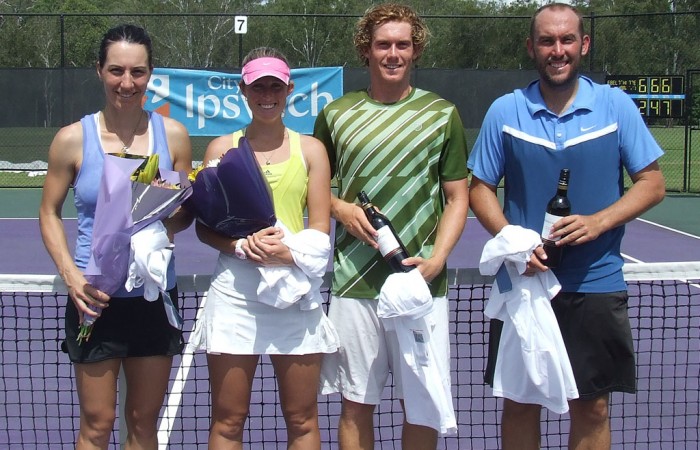 One break of serve was enough for Ebelthite to close out the first set 6-4 against an agitated Cooper, yet Cooper started to stretch Ebelthite in the second set with aggressive groundstrokes and variety.

He looked set to take the second set after building a 5-2 lead before Ebelthite stormed back to force a second set tiebreak. Ebelthite saved one set point at 7-6 before Cooper closed the tiebreak out 9-7.

Both players required a change of attire in the oppressive conditions for the deciding third set, and it was Ebelthite who lifted his game once again with several net rushes, forcing a break at 3-2 in the third set.

He closed the match out with a series of unreturnable first serves.

Ebelthite was happy with the win and said he hoped it was a springboard for a good 2013 season.

“(I’m) just really happy to win the tournament here in Ipswich. I’d like to congratulate Jonathan on such a great week and I’m sure he will keep up his good form,” he said.

“I’d like to thank all of the sponsors and everyone that works hard behind the scenes to make these events happen. It’s great to have these types of events here in Australia.”

Sanders raced to a 5-2 lead in the first set before Pandzic reeled off five games in a row to win the opening set 7-5. In a seesawing affair Sanders regained the momentum by winning the next five games before closing out the second set 6-2.

However, Pandzic would not be denied, winning a tough third set 6-2 and ecstatic with her victory.

“I’m so happy to win this week as a qualifier. The tournament has been really nice and I would especially like to thank the City of Ipswich and everyone who has made the tournament possible.”