With the individuality of tennis comes the pushing of boundaries, especially with fashion. This Friday, we count down the 10 most outlandish dressers in the game.

One of tennis’s unique characteristics is its ability to combine world class sporting prowess with unique fashion. Compared with team sports, whose players are all required to wear matching outfits, the individual nature of tennis means that players are free to express their individuality through their attire.

But even compared to other individual sports, such as golf, tennis seems streets ahead when it comes to unique style and design. Maybe its the presence of the women in the sport, who are the most recognisable and marketable female athletes on the planet and who have leveraged their unrivalled star power to create their own lines of clothing, or at least have a hand in the designs of their outfits. But let’s not forget the men, who are increasingly emulating their female counterparts when it comes to showcasing their fashion sense on court.

However, with individuality comes the pushing of boundaries. And over the years, some players have unveiled extreme, controversial and jaw-dropping outfits as they’ve taken to the courts.

This Friday, we count down the 10 most outlandish dressers in professional tennis.

The Frenchwoman has a bold, attacking game, and takes the same offensive approach to her on-court attire. Coinciding with Rezai’s rise to world No.15 in 2010 was her propensity to wheel out metallic dresses for her matches, their alfoil-esque quality possibly reflecting and distracting opponents as she deployed bombs from the baseline. Hrbaty was always a dangerous floater in tournament draws on tour, even making the French Open semifinals in 1999 and quarterfinals at the Australian and US Opens. Yet the Slovakian remained largely under the radar among fans and media – that is, until he debuted his outfit at Flushing Meadows in 2005. Which was pink. With holes. Said Lleyton Hewitt, who ousted Hrbaty in the fourth round: ” I just couldn’t lose to a bloke wearing a shirt like that.”

The Brazilian was a burst of colourful energy when he emerged on the tennis scene and quickly won his first Grand Slam title at Roland Garros in 1997. There, he lit up Court Philippe Chatrier with his mass of curls, surfer vibe, and vibrant blue-and-canary yellow get-up. He would win twice more at the claycourt mecca and decided to end his career there in 2008 – breaking out the same outfit in homage to his maiden victory at Roland Garros – after injuries eventually got the better of him.

All great players in their own right (all reached the top 10, and Wozniacki even held down the No.1 ranking for much of 2010 and 2011), this trio are equally notable for their sex appeal. And clearly aware of this, they have played up to it by rocking racy outfits on court – there’s Hantuchova (left) in her skimpy, strappy black dress at Australian Open 2002, Anna K in her midriff-bearing, shorts-and-belt number at the same event, and (right) Wozniacki’s skin-hugging, epically-short outfit at the 2010 US Open. 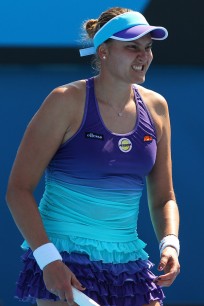 Petrova was never notable for her fashions until she paired up with Ellesse, debuting an eye-popping candy-striped dress at the 2010 US Open and then rocking up in what could only be described as a frilly swimming costume (pictured) at Australian Open 2011. 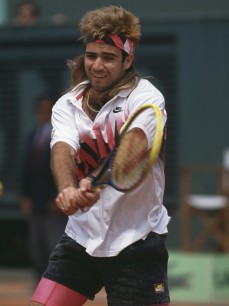 Most tennis fans will remember Agassi as the noble elder statesman of the tour, decked in neutral colours and with head closely shaved. But there once existed a louder Agassi, he of the neon-colours, denim shorts, crazy hairpiece, loud bandana and rebellious, rock-star attitude. Exhibit A: Agassi at Roland Garros in 1990. Who is Anne White, you may ask? Well, she was an American player in the 1980s who won a title and reached world No.19. Pretty impressive. But that all paled into comparison with her outfit at Wimbledon in 1985 – playing Pam Shriver in the opening round, she unveiled a one-piece white lycra body suit which looked more intergalactic than All England Club. Generating much buzz, White was told to change into something more appropriate after the match was suspended at one-set-all due to darkness. Returning the next day dressed more conservatively, she lost, and the outfit was consigned to history.

You might expect to find Serena higher up on this list, until you see what’s coming after. Yet the younger of the Williams sisters has certainly turned heads with her attire over the years, starting with her beaded hair, moving to her Cameroon-inspired World Cup outfit at Roland Garros in 2002, and really gaining traction with her impressive “catsuit” at the US Open that same year (far right). At Flushing Meadows in 2004, Williams took it up a notch, debuting black knee-high warm-up boots (far left) and a skimpy denim skirt (second from right) as she progressed to the quarterfinals. That concept was refined (amped-up?) during her winning run at Australian Open 2005, when she incorporated the warm-up boot design into the meshy, white-and-fluorescent yellow number that had so many bits and compartments that it’s a wonder she didn’t incur a time violation when it came to stripping down for her matches.

The American has a big game, extroverted personality, and loud fashion sense to match, highlighted when she strode out onto Wimbledon’s Centre Court in some jaw-dropping knee high socks and bandana. But it was her leopard-print outfit at the 2007 US Open, kooky tennis-ball dress at the 2011 Wimbledon player party, and her more recent knee-high-socks-and-war-paint get-up (right) that have been among her most memorable ensembles.

For a fashion design school graduate, Venus has committed more than her fair share of fashion faux pas. Remember when her beads burst out of her head at the 1999 Australian Open? That was nothing. Two years later, also in Melbourne, she debuted a dress with an inexplicable slit in the chest (second from right) that seemed to serve no purpose. She came on court for her second-round match with the slit stitched up. Crisis averted. Many years followed during which Venus graced the courts in some classically glamorous and stylish dresses until 2010, when she entered her “illusion” faze. This involved designing outfits with large, plunging slits coupled with flesh-coloured under-garments, causing a stir at AO 2010 and even more so when she took the concept to a racier level with her corset dress at Roland Garros just months later (second from left). Then there was the “Alice in Wonderland” dress (far left) of Australian Open 2011 – which many fans likened to the latticed pastry on an apple pie – before the mother of all outlandish outfits came at Wimbledon that same year (far right). We’re no fashion experts here at tennis.com.au, but we figure Venus must’ve found a curtain, cut some neck and arm holes in, dragged it over her head, and fastened it in place around her waste with the tie from the very curtain she’d ripped off the window. It billowed like a parachute whenever she chased down balls, and may have been the reason for her earlier than expected fourth-round loss.