Stosur reaches third round in Doha

Sam Stosur has bounced back from Australia's Fed Cup loss,downing Romanian Monica Niculescu on Wednesday at the WTA Qatar Total Open in Doha. 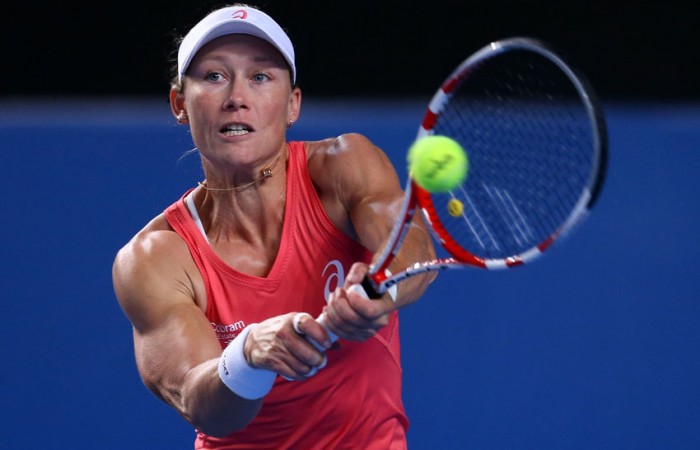 Sam Stosur has bounced back from Australia’s Fed Cup loss to the Czech Republic, downing Romanian Monica Niculescu 6-4 1-6 6-3 on Wednesday at the WTA Qatar Total Open in Doha.

Stosur was beaten by world No.8 Petra Kvitova and world No.18 Lucie Safarova on the weekend as Australia slumped to a 4-0 loss in their Fed Cup tie.

Stosur was optimistic about her form after the three-set loss to Kvitova, saying “it’s probably one of the better matches I’ve played in a few months”, and showed why in Doha.

The eighth seed took just under two hours to register her first win since the Australian Open, setting up a third-round clash with Russian Svetlana Kuznetsova.

Meanwhile, Australian qualifier Anastasia Rodionova was outclassed in a 6-3 6-2 second-round loss to world No.4 Agnieszka Radwanska.

Radwanska was better able to handle the extremely windy conditions that encircled the stadium, coming out on top of an artful battle in one hour and 15 minutes.