Dylan Colaci and Olivia O’Meara were named the most outstanding ballkids of Australian Open 2013 at Rod Laver Arena last night. 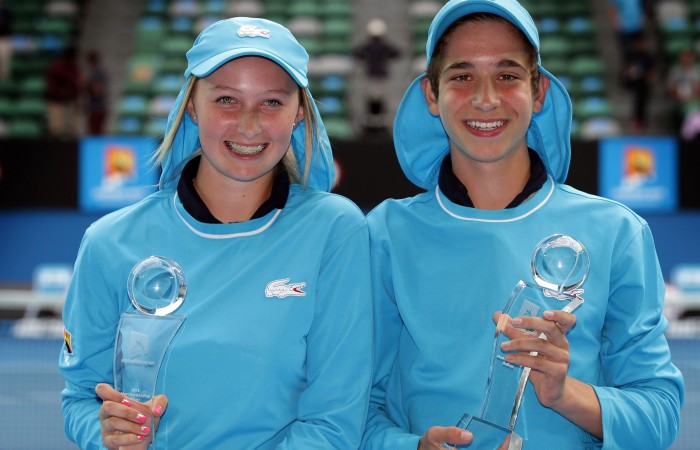 Dylan Colaci and Olivia O’Meara were named the most outstanding ballkids of Australian Open 2013 at Rod Laver Arena last night.

Colaci, from Viewbank, and O’Meara, from Bendigo, were each awarded a trophy, $1000 and the opportunity to ballkid at both the women’s and men’s finals at Melbourne Park this weekend.

“To be named Top Ballkid is a great honour and the perfect way to end my four years as an Australian Open ballkid,” Colaci said.

“It’s so exciting to have the opportunity to be on court for both the men’s and women’s finals this weekend and I can’t wait to get out there and soak up the atmosphere.”

O’Meara, also 15, said she was honoured to receive the Top Ballkid award. “It’s so exciting, I can’t believe it,” O’Meara said.

“This is my fourth year as a ballkid and to end it all with the women’s and men’s finals this weekend will be amazing.”

The Top Ballkid awards are presented to the ballboy and ballgirl who have demonstrated exceptional performance and conduct both on and off the court.

“Dylan and Olivia were the most consistent on-court performers throughout the tournament, but we also take into account their off-court behaviour and the way they have conducted themselves at the event,” said Australian Open ballkids manager Darren Sturgess.

“Both Dylan and Olivia are part of our leadership group so it’s really fitting they have received this honour.

“They’re hard workers, they do the right thing and they give it their all when they’re out on court, as well as setting a great example for the kids who are going to come through and take their place next year.”

Colaci and O’Meara are part of a 380-strong squad selected from across Australia, China and Korea to act as ballkids at Australian Open 2013.

Australian Open ballkids are renowned on the world tennis circuit for their on-court skills and professionalism.

Ballkid applications for Australian Open 2014 are open now until 17 February at tennis.com.au.