Roger Federer says Australian traits are locked into his DNA. 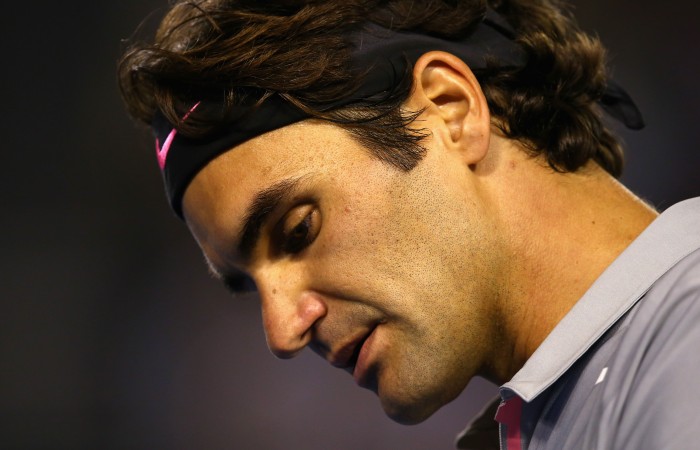 He’s as Swiss as Lindt chocolate, but Roger Federer says Australian traits are “locked into my DNA” and credits his late coach Peter Carter for shaping the most successful career in grand slam history.

In a poignant tribute to Carter, who died in a car accident in South Africa a week before Federer’s 21st birthday, the ageless maestro said the South Australian moulded him as a man and player and remains the most influential coach of his storied career.

As he eyes a sixth final at Melbourne Park in nine years, Federer also recognised the profound impact Tony Roche has had on him and admitted his life could have been so very different without 13 years’ worth of Australian love, mentoring and coaching.

“Work ethic was very important for Australians, so I think I profited a lot from that and early on for me Peter Carter was a very important man just overall for my character,” Federer told AAP ahead of his semi-final showdown with Andy Murray on Friday night.

“He taught me respect for each person. It doesn’t matter if that person is famous or not famous. He just taught me the right values, so did my parents. They got on very well. We were very close to Peter, all of us.”

Federer, who was playing in a tournament in Toronto at the time of Carter’s 2002 death, was left devastated.

The fact Federer recommended South Africa – his mother’s homeland – as a holiday destination for Carter and wife Silvia – only compounded the pain.

But he remains indebted to Carter for adding the calm and mental toughness to the erratic genius of his formative years.

“Obviously Peter Carter knew me for a long, long time, since maybe I was 10 years old or so,” Federer said.

“So he helped me out from 10 to 14 and then from 16 to 20 again, so he’s marked my character and my playing style, technique and tactics, all that stuff, in a big way.”

Carter, who at Federer’s urging was also Switzerland’s only-ever foreign Davis Cup captain, instilled in Federer the attacking intent and was responsible for developing the deadliest and yet most elegant backhand the game has ever seen.

“[Early on] I only had a choice to have a slice because I was too weak to come over it almost,” Federer revealed.

“I did have another coach as well early on, but Peter had the most impact in terms of technique overall.

“Obviously he was the first also to talk to me about Australia really, as such, and then Tony Roche obviously had a big influence as well on me.”

Federer, who also recalled breaking down in tears as a 13-year-old when his father told him the family wasn’t relocating to Australia as he’d hoped, linked with Roche at Christmas in 2004.

The two-and-a-half-year partnership – at the height of Federer’s extraordinary powers and unrivalled dominance – yielded a staggering 192 wins from 205 matches and six grand slam titles.

“I started to work with him when I was world No.1 and he kept me there,” Federer said.

“We worked extremely hard together. I thought we had a wonderful time. To look back and think what a great man he is and I’m still always very happy when I see him again.

“He’s also had a big impact on my game, my work ethic, my respect for history, respect for Australian tennis history, all these things.

“Then of course you’ve had so many great, wonderful players here over the years. It was (Rod) Laver, (Ken) Rosewall, (John) Newcombe and so forth, Pat Rafter, Lleyton Hewitt, (Frank) Sedgman. I always forget a few, Lew Hoad, Roy Emerson.

“Obviously I admire that whole generation and it’s always nice for me now to still see Pat and Lleyton again. I’ve had some great matches with them.

“It’s wonderful that Pat is the Davis Cup captain for Australia and Lleyton is still going so strong, so I feel very close to the country and to the people here in Australia.”

“It’s a different pace down here,” said Federer, voted last September in a poll of Australians as the most admired athlete on the planet.

“The work ethic and the relaxed way of life. The ‘no worries’, you know, it’s just like easy going. But when you do something, you do it the right way.

“You work hard at it, try to be the best and you don’t waste talent normally, that kind of thing. I like that.

“Traveling – not a problem. It’s actually a privilege to be able to travel.

“It’s not a burden and I still feel that today that it’s locked into my DNA, all these things.

“I don’t even need to think about it. I don’t need to motivate myself. It’s a way of life and I just enjoy everything about it.”

Federer’s grandfather was the secretary of the Northern Transvaal Cricket union and the 17-times grand slam champion remains a keen fan.

“All my coaches, they taught me all about it as well,” he said.

“I’ve always had a soft spot for cricket.

“I’ve never been on a cricket oval and, like, played, you know, faced the ball. I’ve never been taught it. I only see it from TV, but I like the sport.

“I know it’s a bit slower. I know they’re trying to speed it up with all the Twenty20 and all that stuff, but I’ve always enjoyed it.

“Obviously with my mum being South African, I’ve always supported the South Africans and then secondly the Australians.”

Just as Australia will always be “like a home away from home to a degree” for Roger Federer, tennis ace and global superstar.

It’s locked in his DNA.