Macsen Sisam and Daniela Kovacevic have been crowned 2012 Optus 12s Australian Champions after winning their respective boys’ and girls’ finals at Melbourne Park this morning. 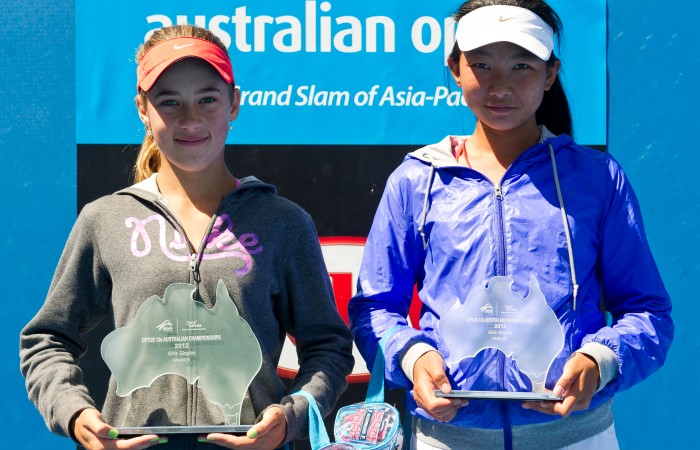 Macsen Sisam and Daniela Kovacevic were crowned victors of the 2012 Optus 12s Australian Championships after winning their respective boys’ and girls’ singles finals at Melbourne Park this morning.

Top boys’ seed Sisam defeated a tough opponent in Queenslander Alexander Crnokrak, coming back from a break down in the second set to seal victory 6-4 6-3.

“I’m really relieved because I was really, really nervous, the most nervous I’ve been in my whole life just before this match and I was really hoping to play well,” Sisam said after his win.

“In the morning I felt little niggles in my shoulder and when I warmed up it went away so I’m really, really happy.”

The New Zealander got off to a roaring start, playing an attacking first game by quickly disposing short balls from mid court.

But Crnokrak matched his opponent’s game, playing an equally aggressive style to level 1-1.

The two exchanged long rallies throughout the opening set, wielding powerful groundstrokes and sending each other deep beyond the baseline on many occasions. Both had opportunities to break but the match stayed on serve with Sisam leading 5-4.

Crnokrak faltered on his next service game, saving two set points before succumbing to an error on the third gifting Sisam the set 6-4.

Crnokrak began to play a cleaner game in the second set, producing more winners and managing to break Sisam for a 2-0 lead. But Sisam immediately leveled at 2-2, before going down another break 3-2.

From there Sisam was simply too good, employing his strong attacking forehand to shut down points quickly. He won the next four games to seal the set, the match and the champoinship 6-4 6-3.

The Kiwi said he was very happy to get the win against his difficult opponent.

“In the first set it started off really tough. It was on serve the whole time until the last game when I broke. I had a few opportunities in that first set to break before then,” he said.

“In the second set he (Crnokrak) got 2-0 up and picked up his game a lot and started hitting a lot of winners, so I tried to just keep the ball in a bit more and play the ball to its merit.”

Sisam said he was impressed with Crnokrak’s competitiveness, crediting his fighting ability.

“He’s really good. Last time I played him he got a lot of balls back and he didn’t really go for it that much. Today he went for it a lot and he got a lot of winners past me so it was pretty hard to guess that he was going to do that before the match. He was really good today.”

In the girls’ final, the top two seeds faced off and it was second seed Daniela Kovacevic who came out on top defeating South Australian Jeanette Lin 6-3 6-2.

Check out all the Optus 12s Australian Championships photos on Flickr

Kovacevic was thrilled to win the national title, saying: “It felt incredible. Never in my wildest dreams would I have thought this would happen.”

Kovacevic started strongly, maneuvering her way around Lin’s aggressive game to take control of the first set and win it 6-3.

Throughout the match she was motivated and determined to win, channeling her inner Lleyton Hewitt screaming out “C’mon!” following a great shot and digging herself out of trouble on serve.

Lin got ahead in the second set, breaking Kovacevic for a 2-0 lead. But luck was not on her side as Kovacevic was gifted the break back in the following game when a net cord went her way.

The fourth game of the set was an epic encounter. The girls exchanged intense rallies in a game that went to deuce eight times. Lin had four break point opportunities but was unable to convert any, the Queenslander’s steely resolve getting her through to level at 2-2.

Lin looked broken following her mountain of squandered opportunities, and from there Kovacevic won the next four games and claimed the championship 6-3 6-2.

“It was tight until I got ahead a few games and then a path opened up,” Kovacevic said following the match.

“I stayed focused. I didn’t go for stupid shots and I just stuck to my gameplan.”

She was thrilled to defeat the top seed in the final, knowing Lin would be a tough opponent.

“She (Lin) was a good fighter and never gave up. I had to create a way, she wouldn’t just give the match to me.”

Review all the Optus 12s Australian Championships scores, draws and order of play.