Top seed Jeanette Lin and No.2 seed Daniela Kovacevic stormed into the final of the girls' Optus 12s Australian Championships Thursday after downing their semifinal opponents. 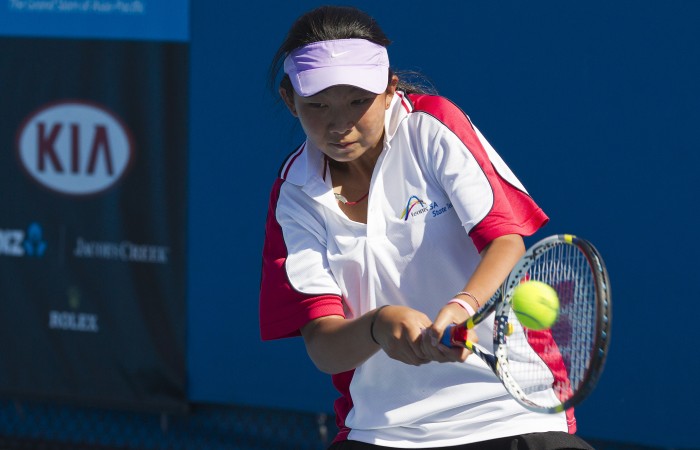 Top seed Jeanette Lin and No.2 seed Daniela Kovacevic stormed into the final of the girls’ Optus 12s Australian Championships Thursday after downing their semifinal opponents.

It was a fitting semifinal lineup with the top four seeds squaring off but, as their seeds indicated, it was the top two girls who proved too strong and will face off in Friday’s final.

In cool conditions on Court 5, top seed Jeanette Lin had a battle on her hands against third seed Violet Apisah but was able to overcome a mountain of errors and a major mental slump to win the match 6-4 0-6 6-2.

Lin appeared nervous in the first few games, going down a break early to give Apisah a 2-0 lead. She immediately regained composure however, breaking Apisah to put the match back on serve.

The next few games saw the girls exchange some long, high-quality rallies, moving each other all over the court and far beyond the baseline.

Lin showcased her power and finesse at 3-3 to break Apisah and lead 4-3 but it didn’t seem to phase the third seed. Apisah kept a level head and remained calm, immediately breaking back much to Lin’s frustration.

With both players struggling to hold serve, Lin took advantage of another break point opportunity in the next game to lead 5-4 and serve for the set. She managed to remain poised and claimed the opener 6-4.

But Apisah was not disheartened from her first set loss, increasing her intensity and dominating Lin for the entirety of the second. Lin began to struggle to keep her emotions in check, and after losing five consecutive games she called for the trainer when the taping on her right knee began to peel off.

Distracted and down on confidence, Lin lost her next service game to gift Apisah the second set and level the match at one apiece.

Apisah began the deciding set in the same fashion as she closed out the second, playing aggressive and dominating tennis, surging to a 2-0 lead.

But Lin didn’t give up. Vocal and determined, she immediately broke back to level the match 2-2.

From there Apisah lost the spark that propelled her through the second set and was no longer able to match the aggressive playing style of her opponent, losing her next two service games.

The other semifinal this morning was an all-Queensland affair, with the No.2 seed Daniela Kovacevic taking on fourth seed Olivia Gadecki on Court 7.

Both girls progressed through epic three-set quarterfinals yesterday but it was Kovacevic who appeared the fresher of the two, usingher strong all-court game to snatch the first set 6-4.

Down a set and a break, Gadecki tried changing her playing style by approaching the net more, but with momentum on Kovacevic’s side her ventures often proved fruitless. Her typically-strong forehands became erratic, with balls regularly flying far beyond the baseline.

Kovacevic remained determined throughout the second set and began to totally dominate Gadecki’s game to lead 5-1. She produced some scintillating crosscourt winners, often creating acute angles to sweep past her opponent.

Kovacevic frustrated Gadecki some more, taking her time at certain points to wipe her face with her towel and leaving Gadecki impatient and waiting to serve at the other end.

After a dominating performance, Kovacevic had little trouble serving out the match at 5-2, sealing it with a strong serve and a short rally that saw Gadecki land her ball into the net.