Bradley Mousley, Harry Bourchier, Zoe Hives and Olivia Tjandramulia each won through to the Optus 16s finals on Saturday at Melbourne Park. 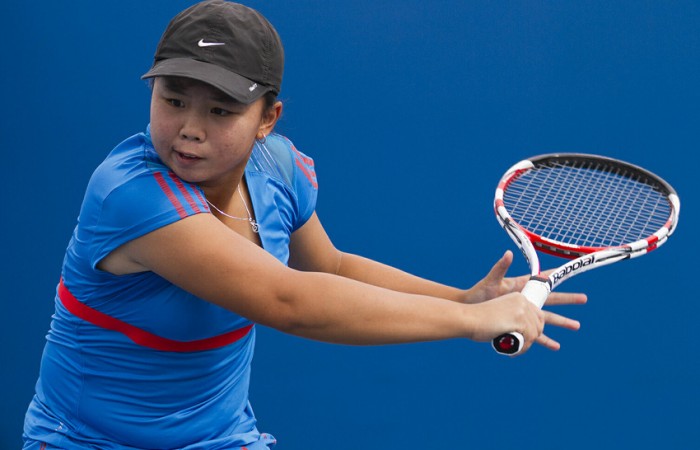 It was a day on which order prevailed at the Optus 16 Australian Championships on Saturday, with the highest ranked players in each match progressing to the finals of the boys’ and girls’ events at Melbourne Park.

Yet despite this, three of the four semifinals were brutal three-set affairs, with the winners emerging after absorbing contests.

In the boys’ tournament, top seed Bradley Mousley and No.2 seed Harry Bourchier set up a blockbuster final after winning their matches in contrasting circumstances.

While Bourchier moved past fourth seed Mitchell Pritchard in straight sets, Mousley was forced to battle from a set behind to eventually subdue No.6 seed Akira Santillan 3-6 6-2 6-3.

It was the first set that Mousley had dropped all week at Melbourne Park, something he put down to starting slowly and subsequently growing frustrated with his form.

“I just tried to pump myself up a bit, and I just started playing better tennis and [became] more engaged in the match,” he said.

The conditions were trying for both players, who were forced to adjust to strong winds, calm conditions, and sunny breaks in between periods of overcast skies.

Despite this, Mousley took confidence from the fact he had defeated Santillan in the round-robin stage of the Optus 18s event – a match he won 6-4 in the third set – and used this knowledge to remind himself to stay true to the game plan that had recently reaped rewards.

“I’m the No.1 seed so of course I expected a little bit from myself, but I’m just happy to have made it through to the finals so far,” he said.

The South Australian will now take on his doubles partner in the 16s final, after Tasmanian Bourchier completed a 6-3 6-4 win in one hour and 25 minutes.

Bourchier has not relinquished a set en route to the decider, but said his path to the title would get much tougher when he faces Mousley on Sunday.

“Last year I had a tough loss first round, and that really hurt. This year I definitely took all of my opportunities and here I am in the final, so I really got back and did a good job for myself,” Bourchier said.

“I’ve been pretty consistent with my training this year, and I’m getting better at it, and overall I’m getting stronger and better.”

Earlier in the day in the girls’ event, second-seeded Zoe Hives and fourth seed Olivia Tjandramulia won their way through to the Optus 16s Australian Championships with gritty three-set victories.

Queenland’s Tjandramulia was even forced to save a match point in the 12th game of the second set, yet did so after unseeded opponent Maddison Inglis gifted her the point on a double fault.

Inglis did display some nerves when presented with a chance to close out the match, having also served for it at 5-4 in the second set.

When the second set proceeded to a tiebreak, the pair produced lengthy exchanges of the highest quality, with Inglis’ flat drives and powerful backhand down-the-line providing a contrast of styles with Tjandramulia’s heavier topspin.

Yet the Queenslander was clearly buoyed by her Houdini act, racing through the breaker to level the match at a set apiece.

Tjandramulia’s steadier shots and temperament paid dividends in the third, helping her secure a 4-6 7-6(3) 6-4 victory.

“I had lots of pressure, and I just kept on fighting, and I eventually got there … it’s just so tough out here. I just tried my best to get every ball in. I reckon I served well at really important points so that helped me in the match,” she reflected.

“It’s going to be tough against her (Hives). I lost to her in three sets last time we played, so I’m just going to try my best out there tomorrow.”

Hives had earlier reached the decider after a see-sawing battle against No.3 seed Andrea Dikosavljevic, an emotional, error-strewn affair in windy conditions at Melbourne Park.

Hives, of Victoria, claimed the first set only for Dikosavljevic to strike back in the second, finding her rhythm and capitalising on Hives’ increased frustration.

The level of play lifted significantly in the third, especially from Hives, who broke immediately in the opening game and went on to establish a 5-2 lead.

Dikosavljevic proved a tough opponent to put away, breaking back in the eighth game and remaining in contention at 5-3.

Yet Hives shut the door on any chance of a comeback when presented with her first match point in the very next game – courtesy of a double fault from the Queenslander – and ripped a wrong-footing forehand winner crosscourt to seal the match.

Then drama unfolded. Dikosavljevic wrenched her ankle when attempting to change direction to reach that forehand, crumpling to the ground and shrieking in pain.

Hives’ immediate reaction was not to celebrate but cross the net to aid her friend, who was helped from the court by tournament staff and her parents.

“I hope she’s alright, because I’m friends with her and she’s really nice and everything, and it’s a shame for her to end like that,” Hives commented after the match.

Yet despite the unfortunate ending, the fact remained that Hives had secured herself a finals berth, which she admitted was very pleasing.

“(I told myself) just take every point as it is, because there were a lot of different conditions out there. I thought I just kept on going, and kept trying every point,” she explained.

“I’m really excited, and I’m ready for tomorrow, so hopefully I can take it out.”