The belly of good luck

A mentor to Australia's rising stars, Mark Hlawaty has worked with some of the greats and Serena Williams likes to rub his belly. James Crabtree finds out why. 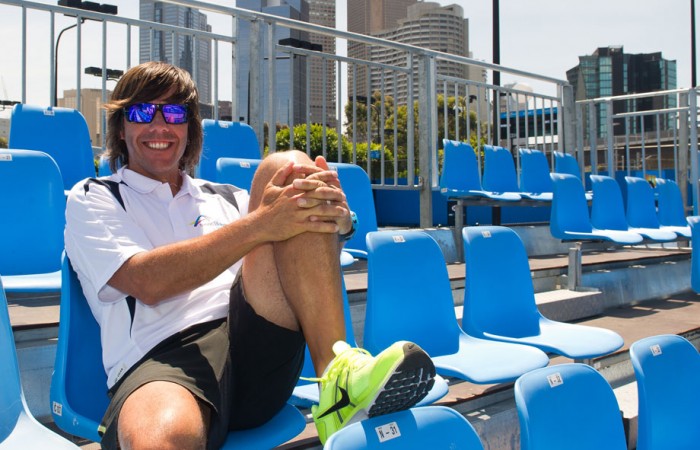 Sitting beneath an umbrella with his legs crossed on a hot sunny day, Mark Hlawaty could be in any sun drenched country in the world. That is until one of his players saunters over to the seat next to him during a change of ends, for not only rest but the sort of guidance you can usually only get from a guy named Yoda.

Mark Hlawaty is a high performance coach based at Melbourne Park and the Victorian girls under 14 Team Manager. He is also a coach that his players believe in because he has shared the court with some of the best the game has ever seen.

The olive skinned Australian of Italian descent is also a former professional player who staged a comeback at the age of thirty, after initially abandoning the dream at eighteen. He is modest of his abilities, insisting that he “would get distracted by two flies, so consistency was definitely an issue.” He also reflects light-heartedly about the versatility of his game, “I volleyed like Pat Cash, moved like Humphrey B. Bear, had the calm nature of John McEnroe and flamboyance of Dame Edna Everage.”

Impressively this comeback saw Mark reach a career high ranking of 470 that included 2 ITF singles titles and 3 doubles, although his body was often “held together with tape, bandages and painkillers.” He reflects that his best ever performance was in fact a practice set while working at the Hopman Cup in 1994 against the newly crowned Grand Slam Cup Champion Petr Korda, where Mark lost 10-12 in the tiebreak. Fortunately, he laughs while shadowing a forehand and referring to the opportunity that got away, “Korda didn’t collect on the $1.625 million dollar wager (the exact reward for the now defunct Cup) because I didn’t have it on me at the time.”

It was during the years in Perth at the Hopman Cup that Hlawaty worked as a hitting partner for many familiar names including Australian Open champions such as Monica Seles and Martina Hingis. Working with these professionals led to the development of a fruitful relationship with Serena Williams, who has captured five Australian Open titles since their affiliation began almost 10 years ago. Mark jokes when referring to Serena’s success that he has been a part of, “I don’t mind if she keeps rubbing my belly. I’m happy to be her lucky garden gnome.”

Hlawaty first met Serena and began working with her in 2003, which was also the year of her first Australian Open title. Since then their on-court relationship has been ongoing and he is tightly involved in her preparation for the Australian Grand Slam. He informs that when acting as her hitting partner he studies game tapes and often plays the role of a chameleon, tailoring his game to mimic that of Serena’s next opponent.

Hlawaty has witnessed first-hand the planning and professionalism that Serena employs that keeps her at least one step ahead of the pack. He marvels not only at the purity in which she strikes the ball, her thunderous serve (that is for the most part unmatched) but also her ability to stay focused in pressured situations, in condition and ultimately motivated and fresh.

Mark’s compliments of Serena’s game are ample, “She’s a different level. She can change gears; her athleticism is a step ahead of a lot of the girls. She has the ability to do things that none of the girls do. The bigger the challenge the better she’ll perform.”

It’s these sorts of proficiencies at the highest level that Mark can pass onto the new hopes of Australia; players that he currently spends up to fourteen hours a week with implementing practice routines and requirements that would usually be behind locked doors. Mark beams as the animation in both his words and expression raise an octave, “It’s great to see the highest level and to [be able to] pass on the experience to the younger kids.”

Above all, Hlawaty is an enthusiastic and lively man with the sort of flowing hairstyle that wouldn’t look out of place as the additional member of any rock band. The exuberance with which he carries himself and his own personal style appears to translate into his method of coaching. Significantly, he sees himself more as a friend to those he coaches rather than a disciplinarian and quotes that “keeping a level of trust and staying positive is the key no matter what the situation.”

One can only admire Mark’s genuine passion for tennis, and the valuable experience he brings to prepare the newcomers of the game.

Now, at 41-years-old, Mark hasn’t ruled out a further comeback, but for the time being it won’t take place until he has “prepared for thirty years and had a couple of hip replacements. Then I’ll be ready for the over 75s,” he concludes with a smile.