Blake Mott has been looking to the past to inspire his future writes Alana Mitchelson. 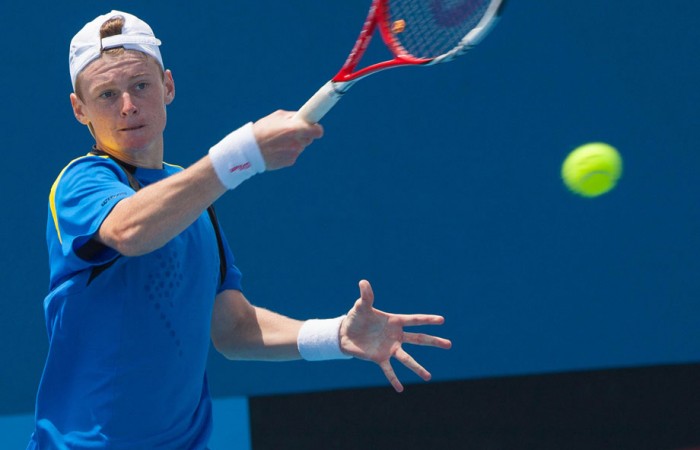 The determined boys who appeared to be so closely matched and equally resistant to giving into defeat showcased some exciting tennis, taking many points into intense rallies.

After relatively comfortably claiming the first set 6-2, Mott admitted to having lost a degree of concentration during the second, which was all Tanza needed to get back into the contest as he took the second set 6-4.

Powerful driving forehands and consistent ground strokes from both sides of the net saw the match into a third set however a more focused Blake Mott maintained a stable attitude snatching back the ascendancy and eventually the match 6-2 4-6 6-3.

Blake Mott’s tennis dream began in the seaside town of Wollongong on the South coast of New South Wales. As a six year old, Mott began playing tennis with his father who also shared an interest in the sport.

It was not until Mott started playing competition that he began to consider tennis as a potential career. And it was Australian stalwart Lleyton Hewitt who helped inspire Mott to take tennis more seriously.

“I like his determination and his never giving up attitude.

“He always fights no matter what the score and I’ve tried to develop that into my game.”

In the lead up to the December Showdown, the 16-year-old trained in Canberra six days a week in preparation for the tournament.

A typical day’s work involved an early 6 am start, a couple of hours of school in the morning before having a hit from between 10 am and 12 pm.

After a lunch break and a workout in the gym, no time was wasted before heading back onto the court before more school work at the end of the day.

“You’ve always got to know when you need rest as well. You have to try to balance rest with working hard, making sure you stay fit and that you don’t get too many injuries.”

Mott expressed the importance of maintaining fitness levels, recounting his unfortunate experience of having suffered an ankle injury only a few months ago that sent him into a six-week recovery period where he dealt with some confidence issues.

“I hadn’t really experienced a long break like that before and then trying to come back and compete again, it was hard to do enough matches to prepare and you lose a couple in a row and you’re constantly just trying to build up confidence.”

On the upside, he was lucky enough to have been invited to attend the Newcombe Medal last Monday and was able to meet some of his tennis inspirations.

“It was a really good night. It motivates you seeing such people as Lleyton across the table from you and him doing a speech about his career definitely inspires you to want to do well yourself and maybe get an award one day.”

Mott is optimistic about his quarterfinal on Friday and hopes that his resolute attitude towards approaching the match will in turn be reflected on the scoreboard in his favour.

“There’s definitely a lot of good guys out there and last year there were definitely some good players like Luke Saville who’s in the top 200 now, or top 300, and obviously it’s a good thing for us because he was here, he was where we are, and we’ll be trying to be where he is next year.

“I’ll probably be up against some tough opponents so I’ll be looking to be aggressive, play my game, have a good attitude and just hang in there as much as I can.”

> Get the latest 18s scores, draws and order of play here