Victoria’s Belinda Woolcock continued her stunning form in the Optus 18s Australian Championships with a confident 6-1 6-2 win over fifth seed Lizette Cabrera of Queensland on Court 6 this morning. 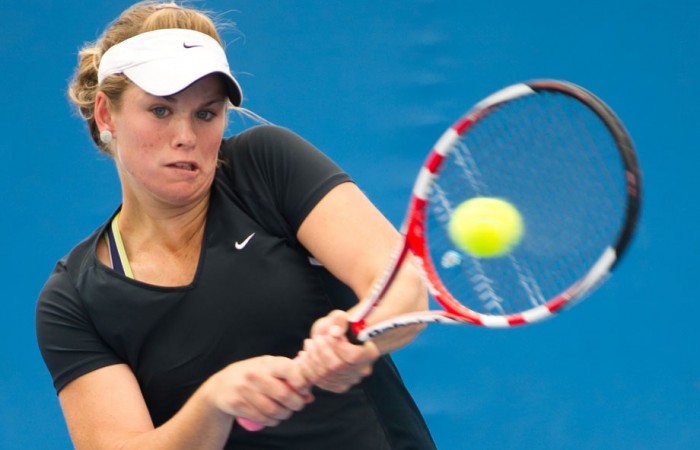 Victoria’s Belinda Woolcock continued her stunning form in the Optus 18s Australian Championships with a confident 6-1 6-2 win over fifth seed Lizette Cabrera of Queensland on Court 6 this morning.

The win puts Woolcock in a strong position to qualify for the quarterfinals of the event, having easily disposed of fourth seed Angelique Svinos in her first round-robin match on Tuesday, and now sits on top of the Group D table ahead of Thursday’s final round-robin matches.

The first set was over in rapid fashion with Woolcock powering to a 6-1 win. She started the second set in similar fashion, staving off challenges from Cabrera who didn’t give up, staying in the rallies and forcing the games to go to deuce, saving many break point opportunities on her serve.

Cabrera, who yesterday won a rain-interrupted marathon three-set match in three hours and 28 minutes over qualifier Annabelle Andrinopoulos, appeared to have no answers, often looking to her support in the crowd for inspiration.

At 1-4 down and with a break point opportunity, Cabrera produced a solid return point, taking control of the ball and moving her opponent crosscourt until Woolcock eventually landed the ball in the net, securing Cabrera the break back.

The comeback wasn’t to last, however, with Cabrera immediately moving to 0-40 on her next service game and losing it to go down 2-5 in the set.

Serving for the match, Woolcock produced some aggressive play, hitting solid winners down the line and eventually outmuscled her younger opponent 6-1 6-2 with an ace.

Speaking after the match, Woolcock is confident with the way her tournament is unfolding. “I’m really happy, it was pretty hard conditions today, we had one stage where it started raining but I’m happy I finished on a strong note.”

Comparing her play to yesterday, Woolcock says she is continuing to improve. “I thought I hit some stronger shots and I just continued playing some solid tennis, which is my aim for the rest of the tournament.”

The cold and wet conditions were not ideal for the players today with the temperature sitting at or below 14 degrees all morning. Woolcock remained unaffected by the weather during the match, though admits she had to change her preparation this morning before taking to the court. “This morning it was hard, I had to do an extra warm up just to get my body moving before I started the match but once I got into the match I was fine.”

Woolcock plays fellow Victorian and qualifier Andrinopoulos tomorrow, who this morning defeated Svinos 7-6(3) 6-4 in the other Group D round-robin match.

Group A saw talented youngster Priscilla Hon defeat Stefani Stojic 6-3 6-3 to put herself at the top of the table in her group.

Tournament number one seed Azra Hadzic came back from an upset loss to Hon yesterday to secure a win against seventh seed Eliza Long, who retired from the match down 0-2 in the third and deciding set. Long appeared to be struggling with a left calf injury that was taped up, and called for the trainer after being broken on serve in the first game of the final set. The final score was 1-6 7-6(6) 2-0.

The other Group B match was played out between number two seed Storm Sanders and Victoria’s Zoe Hives with Sanders victorious 6-3 7-5 in one hour and 45 minutes.

Final round-robin group matches take place on Thursday where the top two finishers in each group will progress through to the quarterfinal knockout draw.

You can check updated results, draws and the order of play here.