The team is bigger than the individual

During his acceptance speech for the Spirit of Australia award at the Newcombe Medal last year, Australian champion Lleyton Hewitt recalled only ever crying twice after tennis matches throughout his entire career. 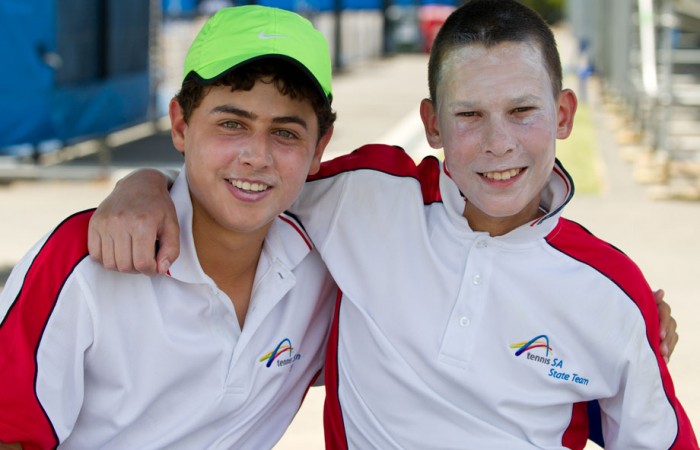 During his acceptance speech for the Spirit of Australia award at the Newcombe Medal last year, Australian champion Lleyton Hewitt recalled only ever crying twice after tennis matches throughout his entire career.

Both of those times were after losing matches while representing his country and playing for his teammates in Davis Cup.

Australia has a proud history in Davis Cup with stars like Hewitt, the Woodies, Pat Rafter, Tony Roche and John Newcombe just to name a few, all joining forces to play together for their nation.

Australian has won the second most Davis Cup titles ever with 28 wins. Only the USA has recorded more victories with a total of 32.

For the women, the Fed Cup is the highest team event. Australia is one of just four nations to compete in the event every year and sits second on the list of champions.

Now the next generation of stars are coming through the ranks and learning about the importance of competing in a team environment.

Playing in the Optus 14s Australian Teams Championships this week has given some of the country’s best up-and-coming stars the chance to represent their state and play not just for themselves, but for a team.

“It’s a great opportunity for these kids to play in a team. They’re always representing themselves so the opportunity to represent a team, something greater and bigger than themselves I think is a really good experience for them,” he said.

“They learn to think about what it means to support others and in tennis that doesn’t happen very often.”

Leeds also highlights the value these team events have for the future of Australian tennis.

“It’s an opportunity for us to keep that Davis Cup spirit alive and teach these kids what it’s like to play in a team and I think that’s really good.“

But for now as young teens, it is the support they receive from teammates and the friendships they form that these developing players deem the best part about playing in a team.

Winter Meagher is representing Queensland at this week’s event and feels playing with his teammates has taken off a lot of pressure.

“Even if you lose there’s always [your] friends. It’s good to be around friends during the tournament, it puts less pressure on you,” he said.

“Especially if you’re from interstate you get really close with them staying in a room. It helps you through matches.”

“If you’re struggling the support from your coach and your teammates helps you get through tough times on the court.”

Northern Territory’s Chase Ferguson also singles out the relationships formed between teammates as the most rewarding aspect of team events.

“Just having all your teammates to support you through your matches and getting you through the hard times,” he said.

“The environment’s really friendly and happy and it’s a lot different to when you’re not with anyone else. I definitely prefer in a team.“

Ferguson’s teammate Jesses Russell agrees that formulating friendships is his favourite part of the tournament.

“The atmosphere of having a teammate cheering you on when you’re down, gets you through the hard times,” he said.

“You can have a laugh with them and they can help you calm down. It’s pretty important!”

Imogen Clews is representing ACT/NSW and didn’t know any of her teammates personally before the tournament began. She says it’s great to get to meet new people by playing tennis together.

“For us as the combined ACT/NSW team, I’m the only ACT person so I’m spending a week with one person I’ve met and another person who I don’t know a great deal about so it’s really good to get to know people,” she said.

“I think it’s a team effort, you know you have people there supporting you the whole time, which is good,”

I think it’s more exciting because you have to play with more people than one even though it’s still individually competitive as well.”