Round four of the Optus 14s Australian Teams Championships continued today as a result of Thursday’s matches being postponed due to the heat rule. 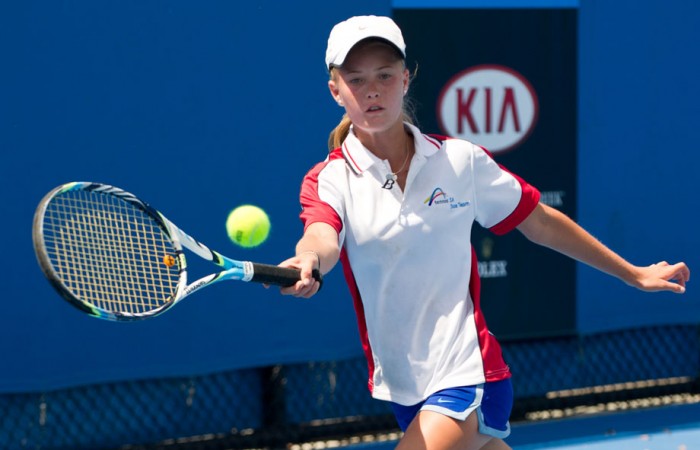 Conditions were much more pleasant on court today than yesterday, which saw no play after 2:20pm due to the heat rule, as Melbourne sweltered in its hottest November day in history.

Round four continued today as a result of yesterday’s postponed matches, as players attempted to catch up for lost time.

On court 10 Victoria’s Mike Vaughan went head to head with Macsem Sisan of New Zealand in the second rubber of their U/14 tie.

Sisan was undersized in comparison to his lusty opponent, but he covered the court exceptionally, defending resolutely and using the angles of the court to win points.

The powerful Victorian right-hander played with a considerable height and power advantage, and was particularly vicious on his forehand side.

The first set was a tight tussle, with both players breaking serve but it was Vaughan who claimed it, 6-4.

Vaughan broke Sisan in the first game of the second set and held serve to make it 2-0, with the match beginning to slip away from the New Zealander, as the young Victorian began to find his groove, breaking again to make it 3-0.

As Sisan began to tire, Vaughan went from strength to strength, beginning to blow him off the court with his relentless ball striking.

The second set proved to be a much more one-sided affair, with Vaughan having too much power and polish for Sisan, winning 6-2.

Vaughan said he felt in control on court against his Kiwi opponent.

“I played alright, it wasn’t my best tennis but I did what I needed to do to win today.”

Speaking about the forehand that played such a major role in his win, the young Victorian said “ I look to dominate with my forehand, its very much a strength for me, helps me to control the points.”

“I like to be pretty aggressive, that’s the key to my game, to keep the points short.”

Vaughan said he began to get a bit of a roll on early in the second set, where he began to really assert his authority over his Kiwi opponent.

“I found a little bit more rhythm and consistency, more than in the first set.”

In other results, Western Australia were comfortable winners over the Northern Territory, winning all three rubbers in straight sets on court five.

Scott Jones (WA) defeated Chase Ferguson (NT) 6-2 6-4, whilst Lachlan Casey (WA) was too good for Ben Lye (NT) 6-0 6-1. The doubles was a closer affair, but WA still prevailed through the combination of Scott Jones and Ben Webster, winning 6-4 6-3 over the NT’s Jesse Russell and Chase Ferguson.

Queensland backed up its comfortable round three victory over New Zealand with another solid performance against ACT/NSW on court 11. The Maroons only conceded one set for the tie, in the doubles, which was a dead rubber.

Jack Walton (Qld) won the first set comfortably against Alex Dejong (ACT/NSW), but was challenged in the second. However, it wasn’t enough to prevent a 6-2 6-4 victory for the Queenslander, getting an early win , which would mean ACT/NSW had to win the second rubber to stay in the tie.

Nathaniel Consalvo ensured this was never going to happen, only conceding one game for the match against Dimitri Morogiannis (ACT/NSW), winning 6-0 6-1 and in doing so wrapping up the tie for his state.

The doubles proved to be a rollercoaster ride, with ACT/NSW claiming the first set comprehensively 6-1 only to concede the second set to the Maroons with the exact same scoreline. Queensland, who now held all momentum in the match cruised through the match tiebreak, winning 10-1 and completing a clean sweep of the tie.

In the girls’ matches today, the Victoria v NSW/ACT tie was continued on from Thursday, with Destanee Aiava (VIC) being too good for Anne-Marie Medcalf, 6-2 6-0  (ACT/NSW).

ACT/NSW fought back strongly through Gabrielle O’Gorman, who had too much power for Jessica Brzozwska, securing a confident 6-2 6-2 victory.

The tie hinged on the result of the double and it was Victoria who continued the trend of straight sets matches, winning 6-2 6-1 with the combination of Destanee Aiava and Michelle Pits over ACT/NSW’s Anne-Marie Medcalf and Imogen Clews.

New South Wales completed a good win over the Northern Territory on court seven, giving up three games for the entire tie, winning every match in straight sets.

An epic on court 12 between Brooke Milner (SA) and Chanistha Ampornachariya (NZ) saw South Australia draw first blood in their clash with New Zealand. Ampornachariya claimed the first set 6-4 before Milner clawed her way back into the match with a hard fought second set win 7-5. Milner ran over the top in the third, claiming the set and the match with a 6-2 win.

For the latest scores updates go to tennis.com.au.