Day two of the Optus 14s Teams Championships was forecast to be a Melbourne scorcher; the blistering summer heat was such that it could already be felt as early as mid morning and it quite understandably proved to be a challenging day for the young tennis players to withstand. 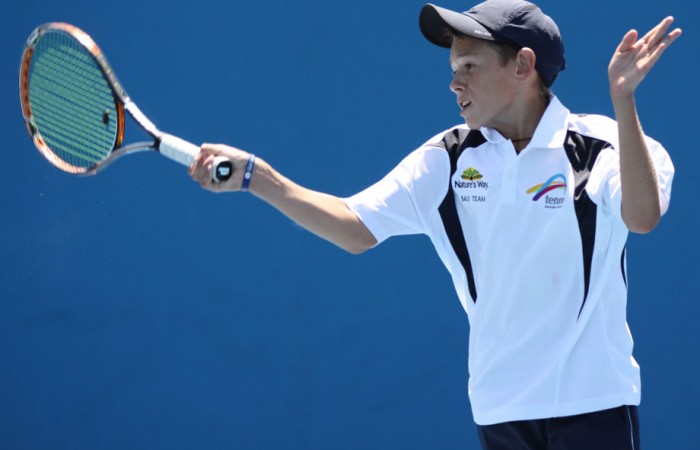 Day two of the Optus 14s Teams Championships was forecast to be a Melbourne scorcher; the blistering summer heat was such that it could already be felt as early as mid morning and it quite understandably proved to be a challenging day for the young tennis players to withstand.

New South Wales’ Alex DeMinaur started the day on court 5 against Western Australian player Scott Jones; a match that showcased a display of numerous exciting angled shots down the far corners of the court from both players, however, DeMinaur’s reasonably consistent baseline points saw him get up 6-2 4-6 6-4.

Benard Nkomba seized success once again for NSW winning his singles match against Ben Webster rather impressively in straight sets 6-0 6-0.

Queensland disposed of New Zealand with the combination of Nathanael Consalvo’s 6-4 2-6 6-2 triumph despite some resistance from Miki Nobuzaw in the second set and Jack Walton’s 6-4 6-2 win.

The ACT/NSW boys 14/U players Alex DeJong and Dimitri Morogiannis clinched both of their singles matches in straight sets 6-2 6-3 and 6-2 6-1 over Tasmania respectively.

Victoria B’s Jaime Sekulovski and South Australia’s Mislav Bosnjak displayed some absolutely terrific tennis in their singles marathon of a match lasting over three hours, both boys enduring the scorching heat through three lengthy sets; the second going to a tiebreak.

The singles match scores for the girls 14/U competition presented similarly consistent results.

Western Australia’s Maddison Inglis displayed some powerful groundstrokes, mixing up her play with a number of baseline volleys, at times bouncing too high for her opponent to return, providing some exciting tennis for those watching from the sidelines.

The sweltering heat appeared to begin to take its toll on some of the young athletes throughout the course of the day, however, admirably, they maintained reasonably high energy levels and continued to keep themselves motivated.

Words of encouragement and praise could be heard from the team managers at the sidelines as the players appeared to grow more frustrated with the weather conditions that were progressively wearing the athletes down physically and mentally.

Queensland girls 14/U Team Manager Gareth Keating, like many of the coaches, stressed the importance of strategy in such wearing weather conditions.

“I tell them to focus on each small target, from point to point.”

New Zealand Boys 14/U Team Manager Clint Packer explained that his boys were not as experienced as the Australian players in dealing with the heat.

“Coming from New Zealand, my advice to my players is to make sure they’re hydrated and prepared physically because the conditions here are quite tough for the kids, considering the heat here compared to what they’re training in.”

It therefore did not come as too much of a surprise that the heat rule came into play at around 2:20 pm.

Matches were still underway at the time of writing, however, the up-to-date match scores can be found here: