Melbourne Park came alive for the first day of the December Showdown with the Optus 14s Australian Teams Championships getting underway. 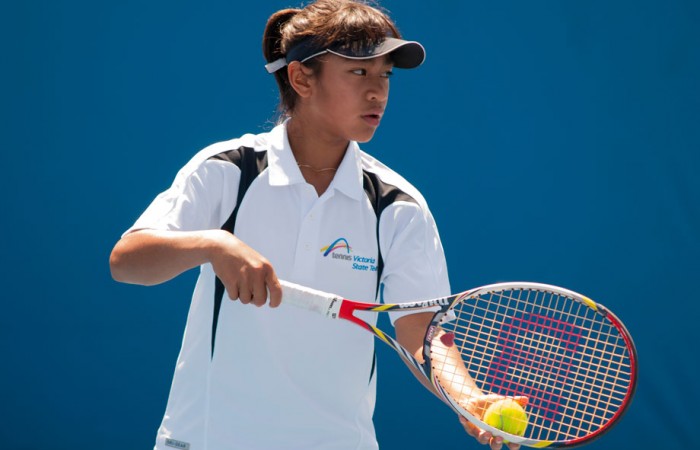 Melbourne Park came alive for the first day of the December Showdown with the Optus 14s Australian Teams Championships getting underway.

With the sun shining, the girls’ competition saw a total of ten teams take to the court with all states and territories represented, as well as a New Zealand and second Victorian team, all vying to get their hands on the Mary Hawton trophy on Sunday.

Top seeded team Victoria came out firing against New Zealand in the morning round of play claiming the two singles matches as well as the doubles to win the tie 3-0. 2011 December Showdown Optus 12s champion Destanee Aiava made a blistering start for Victoria, disposing of Ampornachariya Chanistha of New Zealand 6-2 6-1. She later partnered with Jessica Brzozowska to claim the doubles 6-2 6-3.

Victoria team manager Andrea Stoltenberg was pleased with her team’s efforts today and acknowledges that as top seeds, they will be the target for the other teams this week. “Since we are sitting in the number one spot everyone is going to try and knock us down but we are going to try our best.”

On court 12 the second seeded Western Australians got off to a good start with Maddison Inglis completing a convincing victory over Victoria B’s Jaimee Fourlis 6-1 6-1, reflecting her high Australian ranking of 112.

Team manager Andrew Roberts says he was happy to start the day with a win from up-and-comer Inglis. “I’m very happy with the things we’ve been working on and the way she put it into practice out there.”

The Western Australians are sure to be favourites to make the final on Sunday, and their 3-0 win over Victoria B will give them confidence. “It’s been a good start to the week,” says Roberts, “We’ll be taking it one match at a time.”

In other results South Australia and Queensland completed their morning ties with solid 3-0 wins over Tasmania and the Northern Territory respectively.

South Australians’ Sarah Brown and Somer Dalla-Bona recorded straight sets victories in the singles and combined to win the doubles 6-2 6-0.

Queensland lost only 4 games over the three morning matches and team manager Gareth Keating was proud of the way his girls played today, especially following a late arrival to Melbourne yesterday due to a flight delay. “Fantastic start for the girls, I’m really impressed with their intensity.”

With the mercury set to top 38 degrees tomorrow, it will be a challenging day for all teams, though arguably more for our friends across the Tasman who will be unaccustomed to the high temperatures.

“We’ll just try to keep the girls hydrated and out of the sun as much as possible,” New Zealand manager Angela Swinkels says, “It puts us at a little bit of a disadvantage. The weather in New Zealand is not great at the best of times but it has been a pretty poor summer so far.”

Second-round matches were still in progress at the time of publishing, scores will be published here as they come to hand: