Top seed Victoria sent an emphatic warning to their competitors on the first day of the Optus 14s Australian Teams Championships, cruising through the first round without dropping a set. 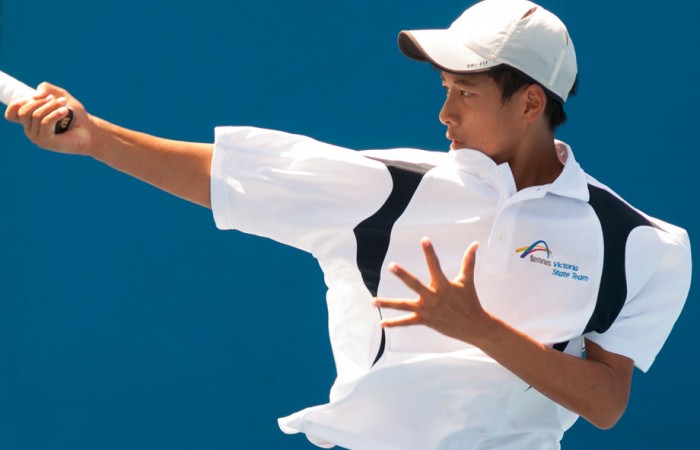 Top seed Victoria sent an emphatic warning to their competitors on the first day of the Optus 14s Australian Teams Championships, cruising through the first round without dropping a set.

Richard Yang got the No.1 seeds off to a flying start, accounting for Alex DeJong from the ACT in straight sets 6- 0 6-1.

Yang’s clever and skilful play forced DeJong into making a series of errors resulting in the straight-sets scoreline.

Nguyen put on a display of classy crosscourt groundstrokes to take the match 6-0 6-3 and secure Victoria its first win of the tournament.

Nguyen then partnered Mike Vaughan in the doubles where they beat DeJong and Patrick Wielemborek 6-0 6-1.

Nkomba appeared in complete control from the onset of the match with impressive footwork and swift movement around the court.

New South Wales then went on to win the doubles to take the tie 3-0.

“We had a really solid start obviously not dropping a set so it was good to see,” Pyne said.

“I think it was just a consistent effort from the whole team, you know the areas we’ve been working on. We didn’t really give any chances away so it was good.”

It was not as smooth sailing for third seeds Queensland who were surprised by Tasmania in a hard-fought encounter.

Tasmanian Nick Fader fought through trying conditions to take out the first set against Queenslander Jack Walton in a tiebreaker before cruising to victory 7-6 6-2.

The second singles match was a different story for the Queenslanders with the aggressive play of Nathanael Consalvo overpowering Daniel Groom 6-2 6-1.

But it was the Tasmanians who were able to break the deadlock with Fader and Tom Cornish beating Walton and Winter Meagher in the doubles 7-6 6-0.

Perhaps the most hotly contested first round rubber was played between Victoria B and South Australia.

After struggling to find his rhythm in the first set, Victorian Jamie Sekulovski took out the first rubber 1-6 6-1 6-1.

The Victorian had the support of the home crowd who rode every high and low as he fought his way back into the match.

In the second set Sekulovski began to show off an impressive display of powerful groundstrokes and a solid serve.

Ferguson was unable to contend with the revamped game plan, as Sekulovski powered to an inspiring victory in the scorching Melbourne heat.

Team manager Emily Rea praised Sekulovski for his ability to fight his way back into the match.

“Jamie started off pretty shaky, lost the first set, but once he began to hit a few balls he was awake.”

Fellow Victorian B team member Stefan Skadarka started his match in emphatic fashion before fighting though a tight second set against Ben Lye.

Fatigue played a major factor in the match with both players tiring, which saw the unforced error count escalate.

With the tie already decided, Sekulovski and Matthew Ramios beat Lye and Jesse Russell in the doubles 6-1 6-1.

Round two matches are continuing, you can view all the day’s scores here: