Postcards from the tour

Australian Tennis Magazine chats with John Blom about the weird and wonderful life of a globe-trotting professional tennis chair umpire. 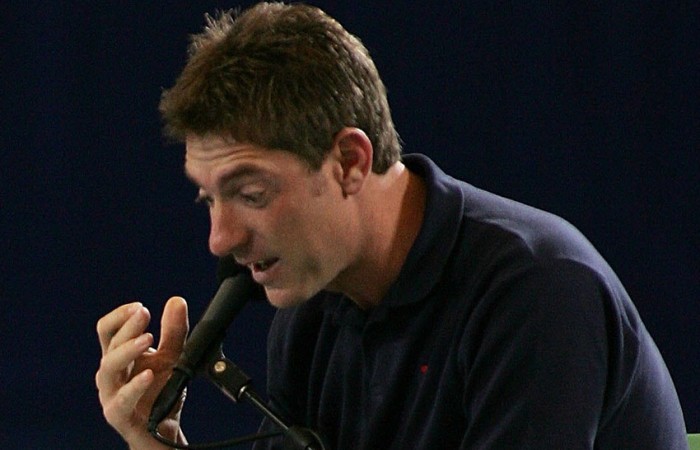 Sporting careers are often described as a journey. For the Australian-based but internationally-roaming umpire John Blom, who has managed everything from cows in Indian tennis clubs to Israeli interrogations, that’s literally true – and there’s no telling where the journey might take him next.

The first postcard, from Palm Springs, California, arrives late in March, recounting Aussie Matt Ebden’s upset of local hero Mardy Fish at nearby Indian Wells, which the writer explains is “basically a highway with a golf course attached and a tennis centre rising out of the sand.”

It’s always interesting to hear such insights directly from the tour but in this case that seems particularly so; confirmed soon afterwards when further instalments arrive from Ipswich and Bundaberg in Queensland, followed by Namangan, Uzbekistan, Frankfurt, Germany and Buenos  Aires, Argentina – all within a four-week period.

John Blom – based in Sydney but located anywhere – has been an international chair umpire for more than 10 years and when he’s not officiating at Grand Slams or Davis and Fed Cup ties, you might find him at Challenger tournaments or other events throughout Australia and beyond. “Some of the destinations are not all that glamorous but it’s a great way to see the world,” he tells Australian Tennis Magazine.

The near 20 postcards we receive in a six month period take in 12 different countries on four separate continents. Despite the arduous travel required, the Sydneysider is hardly complaining. “I spend about half a year on the road, and do quite a few weeks for Tennis Australia when I am not overseas,” Blom explains. “It’s a good balance of weeks abroad and weeks at home, so the lifestyle is definitely manageable.

It’s also endlessly interesting. Asked to describe which of the many locations has stood out the most, Blom names Karshi, close to the Afghan border in southern Uzbekistan, where an American military air base was located until recently.

“It was a boon for the local population as well, and even though the base is now gone, those that can speak English do so with strong American accents, learned from their dealings with the American personnel,” he recalls of the setting for an ATP Challenger event. “Strange location, in the middle of an arid desert region, and no real city to speak of, just a sprawl of housing in a flat, hot landscape … I woke up there every morning and wondered where I was and why.”

Another unforgettable week occurred in Chikmagalur, in south west India, also at a Challenger event. “There was no roof on the player’s locker room, not all the courts were completed so we had to play on the few that were actually painted and one day a cow sauntered into the office and wouldn’t leave,” explains Blom, who was also stunned to discover that the bare-footed ball boys would run for the lunch tent mid-match. On top of those challenges was a near arrest after a player hurled a plastic chair across the pavilion patio and cleaned up the Governor’s wife. “Cue diplomatic incident!” Blom laughs.

It’s not surprising then to hear that the Australian considers careful communication as one of the most important skills in his travelling life – as he discovered when arriving to umpire at a Davis Cup tie in Israel. “Tel Aviv Airport is notorious for security but even I was amazed at the interrogation,” Blom says, describing the grilling he received after a tape measure was discovered in his luggage. “By the time he finished with me the Mossad guy could probably have passed Tennis Officiating 101!”

The travelling life is one that’s constantly enriching for Blom, who doesn’t hesitate to reel off a string of locations when asked to name his favourite, starting with South Africa (“it’s like Australia but different if that makes sense”) where he discovered some great people, stunning scenery and memorable restaurants.

It’s a tempting lifestyle for any tennis-lover with a sense of adventure and Blom notes that despite the tyranny of its distance, Australia is one of the best places to try and attain it. “We’re lucky to have the Australian Open which can work as springboard,” he says. “If you perform well there, then there are opportunities to work at bigger tournaments around the world as a line judge and from there to start getting some experience as a chair umpire. If you show an aptitude for it then the possibilities increase.”

Read the full feature in the November issue of Australian Tennis Magazine.