Serena Williams and Maria Sharapova recorded comfortable semifinal victories to set up a start-studded final at the WTA Championships in Istanbul. 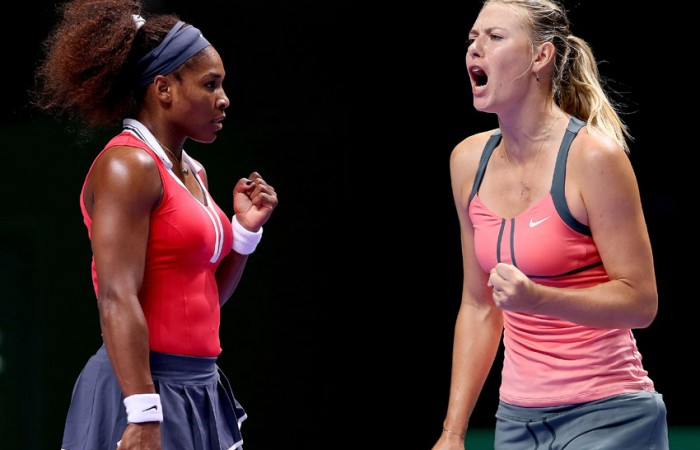 Maria Sharapova set up a blockbuster WTA Championships final against Serena Williams on Saturday with a crushing 6-4 6-2 win over world No.1 Victoria Azarenka.

Olympic, Wimbledon and US Open champion Williams had earlier eased into Sunday’s title match with a 6-2 6-1 success against an exhausted Agnieszka Radwanska in a repeat of this summer’s All England Club final.

“I have lost to Victoria a few times so I was happy to get the chance to play against her,” said Sharapova.

“Against the world No.1, you have to run down every ball. She’s No.1 for a reason so I had to be ready for every shot.

“It will be a difficult match against Serena. She’s been on fire – she’s the one to beat.”

The Russian designed sensibly bold tactics to frustrate the heavy-hitting Azarenka, stuck to them bravely and executed them excellently. She hit 30 clean winners on the slow surface.

Azarenka, who had secured the year-end top ranking the day before with her win over Li Na, was unexpectedly subdued – perhaps hindered by a strained right thigh which she grasped several times.

At the end, Sharapova looked more than usually excited, shrieking loudly and pumping her arms very hard – maybe because it avenged important Grand Slam defeats in Melbourne and New York.

Perhaps also she fancies her chances of regaining a WTA Championships title she last won in her breakthrough year in 2004.

While Radwanska had had a record-breaking three-and-a-half hour match against Sara Errani the night before, Williams had had a rest day and the statistics showed the underdog had already run three times as far as the former champion to get to the semifinals.

Not surprisingly, Radwanska had admitted it would be an achievement “just to get to the court in one piece”.

Serena’s side-to-side groundstrokes soon made it clear the Polish player would have to cover large areas of court again and that was something which could not be repeated for long.

“I really wanted to run, but my legs didn’t,” Radwanska admitted.

Williams was certainly sympathetic to the Pole’s predicament.

“I just told her it was awesome that she played so well and played through another match after playing a good eight hours. It was really inspiring for me.”

Despite the mundane encounter, Williams was almost as thrilled as Sharapova. Waving ecstatically, she announced all she wanted to do was finish 2012 with a win.

That would have special meaning for her, since this has been a year in which she proved she has finally recovered from a horrific 12 months during which a blood clot in her lungs threatened her life.