Sam Stosur has been unable to make the most of her late call-up to the WTA Tour Championships, suffering a three-set loss to world No.7 Sara Errani. 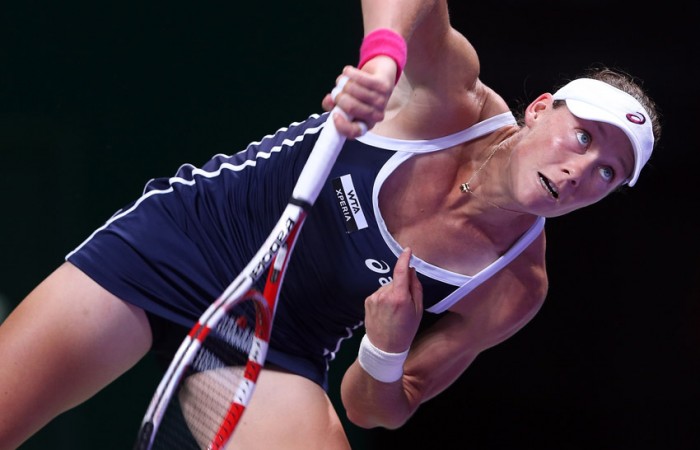 Sam Stosur has been unable to make the most of her late call-up to the WTA Tour Championships, suffering a three-set loss to world No.7 Sara Errani.

Handed a start following the withdrawal of defending champion Petra Kvitova, Stosur went down 6-3 2-6 6-0 in her White Group clash on Thursday to dash her hopes of advancing in the tournament.

She still has one round-robin match remaining, against Maria Sharapova.

Stosur had been set the difficult task of needing to win both her matches to advance to the semifinals after Kvitova had pulled out with a virus following her opening loss to Poland’s Agnieszka Radwanska on Tuesday.

Errani scored the first break of the match in the opening set, winning four straight points from 30-0 down in the seventh game to take a 4-3 lead.

Despite pocketing the set shortly thereafter thanks to a Stosur double fault, Errani was unable to carry her momentum over into the second. That was mainly due to the Australian upping her game, smacking a forehand winner to claim an immediate break.

Stosur broke serve twice more to level the match at a set apiece, before the wheels fell off in the third.

Errani’s three service breaks in the final set were gifted to her by the world No.9, who produced a botched smash, backhand error and then, on match point, an untimely double fault – her seventh – after almost two hours on court.

Having lost her first five career matches against the Australian, Errani has now beaten Stosur in their past two meetings – in the 2012 Roland Garros semifinals, and now here in Istanbul.