Samantha Stosur has fallen just short of her first title of 2012, beaten by third seed Caroline Wozniacki in the WTA's Kremlin Cup decider in Moscow. 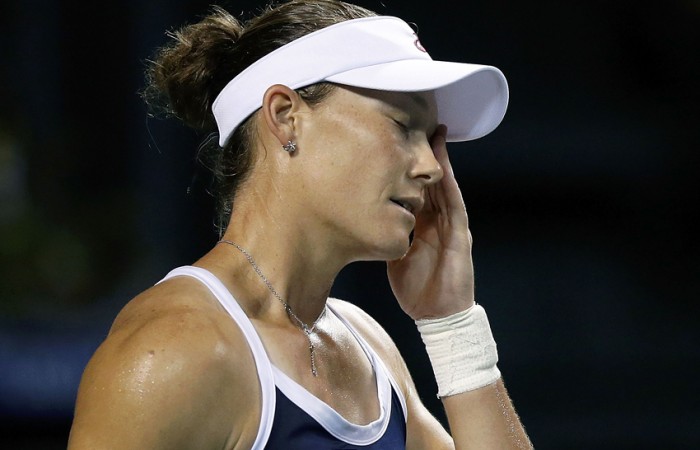 Samantha Stosur has fallen one win short of her first title of 2012, the top seed going down to third seed Caroline Wozniacki of Denmark in the WTA’s Kremlin Cup decider in Moscow.

Former world No.1 Wozniacki won 6-2 4-6 7-5 for her 20th career title and second this year to level her head-to-head record with ninth-ranked Stosur at 3-3.

“It was a tough match and it could have gone either way,” said Wozniacki, who had to dig deep to fight back from 1-3 down in the third set.

“But at the right times I managed to win the right points. I tried to stay aggressive and stay close to the line and just dictate.”

To the Australian, who has won just three of 15 finals contested, she said: “You win some, I win some but that’s sport.”

Stosur felt she was unlucky at times. “I certainly put myself in too much of a hole to be allowed to get out of it,” she said.

“I feel like I went for the right things and missed by a couple of inches.”

She was playing in her second final this season after also being a runner-up in Doha.

Wozniacki, currently 11th in the world, broke early for a comfortable 3-0 lead.

The Australian broke back in the fifth game but failed to level as the Dane produced two more breaks to take the opening set in 37 minutes.

Stosur, the 2011 US Open champion, fought back in the second set to level at one set all after one hour 20 minutes on court.

The 28-year-old Stosur started the deciding set with an immediate break to grab the 2-0 lead but Wozniacki broke back in the sixth to level at three games all.

In the 12th game Wozniacki made the deciding break to win the set and the match in 2hr 13min when Stosur, who survived two match points, sent the ball off the court with a forehand cross.