Top seed Sam Stosur notched her 400th career win after a hard-fought win over France's Alize Cornet at the Kremlin Cup, moving into the quarterfinals. 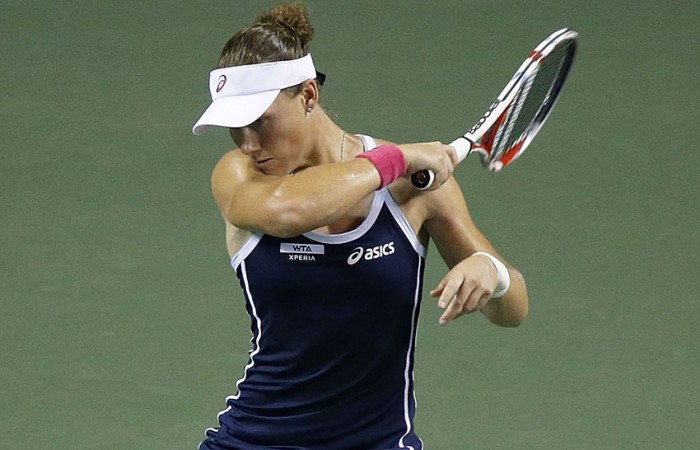 Top seed Sam Stosur is through to the quarterfinals of the WTA Kremlin Cup, following a straight-set win over France’s Alize Cornet on Thursday.

It was the 400th win of Stosur’s storied career.

“We always play tough against each other,” Stosur said.

“But we haven’t met for a long time and we have both seriously improved our tennis since our last meeting.

“Today I had plenty of opportunities and chances to finish the points off. And it was important to believe I was doing everything right to receive the win as a reward.”

The rivals traded breaks twice in the opening set to force a tiebreak which Stosur won to gain a one-set lead in one hour, 21 minutes.

In the second set there was little between the pair but the 28-year-old Stosur got the deciding break in the 11th game to take the set and the match.

Stosur will now face Czech Klara Zakopalova for a place in the semis.

Fourth seed Ana Ivanovic of Serbia cruised into the last eight with a 6-1 6-4 win over 19-year-old local qualifier Valeria Solovieva.

“It was a good match for me overall,” the 2008 French Open champion and former world No.1 Ivanovic said.

“Though the surface here is rather slow and it took some time to adjust to it. And it’s never easy to play someone you haven’t seen before as you don’t know how they react in the different situations but I’m happy I managed to finish the match in good style.”

Seventh seed Maria Kirilenko, the last Russian player in the field, beat Yaroslava Shvevdova of Kazakhstan 7-5 6-4 on her way into the quarterfinals.