Tennis' glamour quotient has risen dramatically over the years thanks to a string of celebrities becoming romantically involved with top players. 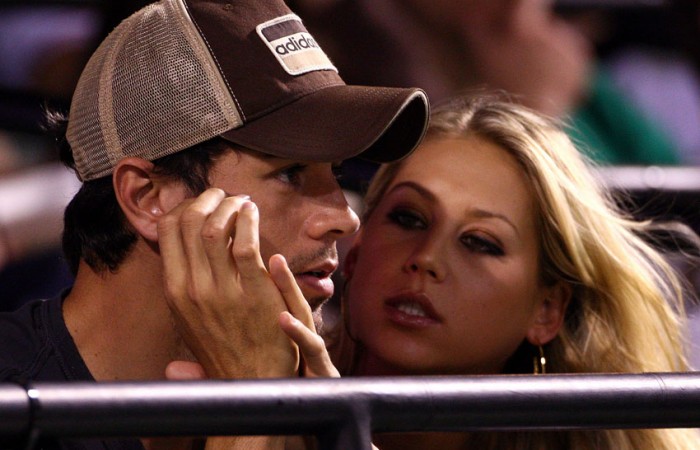 Tennis and celebrity have always gone hand-in-hand, with the world’s biggest tennis stars celebrities in their own right, and many celebrities snaring tickets to see those stars in action at the grandest tournaments around the world.

But tennis has increasingly risen in the glamour stakes given that many celebrities have been so taken by the sport that they have begun dating those that play it. Over the years many a tennis star has been romantically involved with a celebrity in another arena, capturing the public’s interest and adding some more glitz to the sport.

Here’s a look at 10 of the most notable celebrity partners of tennis players. 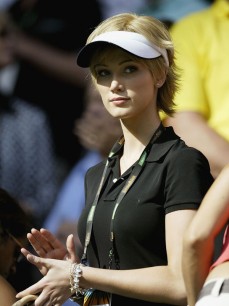 Australian pop star Goodrem saw Philippoussis for a good deal of 2004, seen here supporting the Aussie former top 10 player at that year’s Australian Open. Philippoussis’ support for Goodrem during her battle with cancer was reportedly the inspiration behind her single “Out of the Blue” yet things turned sour when media reports surfaced of Philippoussis’ affair with socialite Paris Hilton. The two split, and have both moved through a string of relationships while both subsequently appearing on reality TV programs. A tabloid saga from start to finish.

Less tabloid-ish was Serena Williams’ relationship with rapper Common (a.k.a. Lonnie Rashid Lynn), pictured in the stands at Arthur Ashe Stadium supporting Serena during the 2008 US Open final against Jelena Jankovic. In fact, it has been rare to see the American hip-hop artist at tennis events, as was it to know the status of the pair’s on again-off again relationship. It reportedly began in 2008, ended in early 2010, seemed to have resumed again later that year when his images popped up on Serena’s twitter profile, but as of September 2011, was confirmed by Common to be over. Of note, Serena’s singledom has coincided with arguably the richest vein of form in her career.

The pair seemed an unlikely couple given that just months before their relationship started, they were engaged to other people – Hewitt to fellow player Kim Clijsters, and Cartwright to Home & Away co-star Beau Brady. But their whirlwind romance was cemented following the 2005 Australian Open when Hewitt proposed to Cartwright, and later that year, they were married. Despite the speedy nature of it all it seems to be a match made in heaven – they now have three children, who along with Bec accompany Lleyton on tour for much of the year.

Sampras married the glamorous actress – whose film credits include Billy Madison and I Know What you Did Last Summer – in late 2000, and shortly after Sampras won his final major at the 2002 US Open and promptly retired, the pair welcomed their first son, Christian, into the world. Their second son Ryan, pictured with the couple below, was born in 2005. 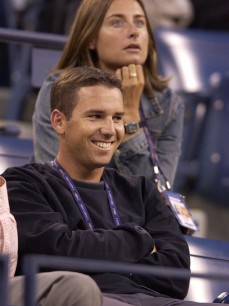 Hingis, perhaps slightly unfortunately, was known as the “black widow” earlier in her career after dating a string of tennis players – Magnus Norman, Julian Alonso and Ivo Heuberger – whose careers went south shortly after those relationships ended. Yet her most famous partner was top golfer Sergio Garcia of Spain, who she dated before her first retirement from the sport in 2002. Garcia didn’t befall the same fate, becoming the world’s No.2 golfer in 2008. 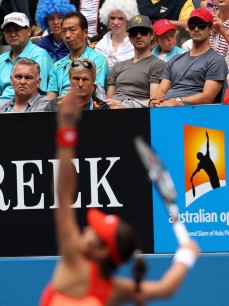 Another recent glamour couple of note was former world No.1 and French Open champion Ana Ivanovic and prodigious golfer Adam Scott (seen supporting his girlfriend at the 2012 Australian Open). The Australian Scott and Serbian Ivanovic – who has family in Melbourne and has been adopted as a sweetheart of the Australian crowds – were also an example of another on-off relationship, breaking up in 2010, reuniting in 2011 and apparently splitting again in 2012. The pressures on the relationship caused by their frequent (and differing) travel schedules have often been cited as a reason why the relationship could never gain ultimate traction. 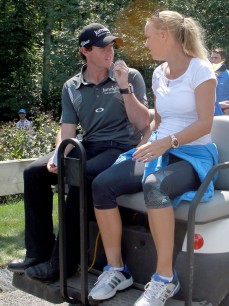 Continuing the theme of tennis player-golfer unions, the latest is the relationship between former world No.1 tennis player Wozniacki and current men’s golf No.1 McIlroy, who have now been dating for more than a year. In truly modern style, the pair’s flirtations and early relationship played out in the twittersphere, and since then they have been the model couple, happily supporting each other at various golf and tennis tournaments and reportedly sharing advice on how to deal with life at the top of the game.

This relationship warrants inclusion to Friday’s list purely because, even through they’re both tennis players, both are celebrities in their own right thanks to their stratospheric tennis accomplishments. Together they combine for 30 Grand Slam singles titles, helping them form the formidable mixed doubles combination at the 2009 Wimbledon roof test event (pictured below). Their romance ignited at the French Open in 1999 – which they both won – and has blossomed into a happy marriage with two children. 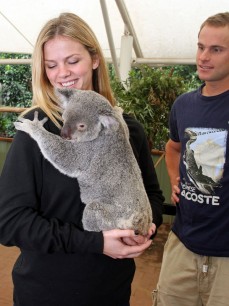 It was an unconventional start to a relationship – Decker reportedly captured Roddick’s attention when the tennis star was leafing through the swimsuit edition of Sports Illustrated magazine. Taken by what he saw, he organised his agent to contact her agent to set up a meeting. It worked, as the two began dating in 2007, and married two years later. Decker is less the model and more the actress these days, appearing in the films Just Go With It, Battleship, and What To Expect When You’re Expecting.

Anna appeared in the music video for Iglesias’ 2001 single Escape, playing his love interest. It soon became that way off camera as well, with the pair beginning to date in 2001 and apparently still going strong to this day. Despite a relationship of more than 10 years, the glamour couple reportedly have no plans to marry.