Talking point: Djokovic in the clutch

In the latest edition of Talking Point, Matt Trollope examines Novak Djokovic's increasing reputation as the greatest at producing his best tennis when the stakes are highest. 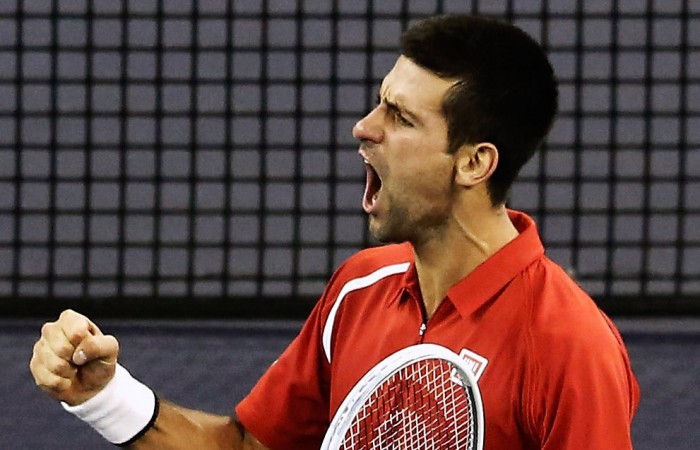 After yet another epic comeback at the Shanghai Masters in which he saved five match points to defeat Andy Murray in the final, Novak Djokovic is cementing a reputation as possibly the best clutch player in the history of the men’s game.

Novak Djokovic went from talented top player to superstar of the sport during his sparkling 2011 season, characterised by a dominance rarely seen in the game. And around that time – beginning late 2010 and continuing into 2012, to be exact – the Serbian began to regularly display an extraordinary ability to produce his best tennis in the most pressure-packed situations of them all.

Time and time again during this period, Djokovic has been able to elevate his game when facing match points, finding apparent calmness, clarity of mind and courage when his back is to the wall. He famously beat Roger Federer after being down two match points in the fifth set of the 2010 US Open semifinals, and repeated the feat – even more audaciously when Federer was serving for the match in the fifth – at the same stage of the 2011 event.

There was his recovery from four match points down against Jo-Wilfried Tsonga in the French Open quarterfinals this year, keeping alive his quest for a fourth straight major title. And earlier in January, although he didn’t save match points, he emerged from 4-2 down in the fifth set against arch rival Rafael Nadal to record a stunning triumph in the final of Australia Open 2012.

The world No.2 was at it again at the recent Shanghai Masters, saving an incredible five match points in the second set of the final against Andy Murray before going on to take the match in three. A feature of this particular comeback was the regularity with which Djokovic was able to conjure winners to stave off those match points, as well as the nerve to successfully pull off a magnificent “tweener” when down 7-5, 5-4, 30-0, keeping him alive in a point which he ultimately won, and would go on to prove significant.

This long line of Houdini-like escape-acts has helped craft Djokovic’s reputation as one of the best – if not THE best – clutch players the sport has ever seen.

And that’s saying something, for Djokovic is playing in an era notable for its gritty fighters, steely competitors and those that love nothing more than staring down an opponent when the stakes are at their highest. Rafael Nadal’s fighting spirit is legendary, as is Lleyton Hewitt’s and David Ferrer’s. Roger Federer has staged some notable comebacks from two-sets-to-love down. Juan Martin del Potro went toe-to-toe with the much-lauded Federer in the 2009 US Open final, and despite being the younger and vastly less experienced player, held firm in that fifth set to win his first major title.

And many players that came before Djokovic would also fancy themselves as supreme players in the clutch. Bjorn Borg, cool as ice, beat all of his contemporaries on the biggest stages – including that famous five set Wimbledon final of 1980 – to etch his name among the greats. Gritty baseliners Mats Wilander and Ivan Lendl won many a five set epic, and several major titles to boot, thanks to their refusal to give anything away, regardless of their fatigue levels or the score. Federer’s main rivals for GOAT honours, Rod Laver and Pete Sampras, won countless five-set Grand Slam matches on the basis of their reputation alone – while opponents blinked in the tension of the moment, they retained complete faith in their excellent shot-making abilities.

But none of those players seem to possess the ability to produce such extraordinary tennis when match point down. While it’s an impressive feat to recover from a fifth set deficit, or outlast an opponent over five sets, there still remains a margin for error in those situations, where one point won’t cost you the chance to complete the comeback.

When facing match point, there is no such luxury. Just one error proves fatal, as does a killer blow from your opponent. That Djokovic has been able to prevent the latter from happening, while raising his game fully aware of the former, speaks volumes. Making it all the more impressive has been his uncanny ability to sustain this high level of play, amid near-unbearable tension, over multiple match points.

It borders on a go-for-broke, throw-caution-to-the-wind style of play, the kind that prompted these (somewhat deluded) comments from Federer after Djokovic erased one of those 2011 US Open semifinal match points with a scorching forehand return winner.

“It’s just the way he returns that (shot). It’s just not (like) a guy who believes much, you know, anymore in winning. Then to lose against someone like that, it’s very disappointing, because you feel like he was mentally out of it already. Just gets the lucky shot at the end, and off you go.

“Confidence? Are you kidding me? I mean, please. Some players grow up and play like that – being down 5-2 in the third, and they all just start slapping shots … For me, this is very hard to understand. How can you play a shot like that on match point?”

You can do it when you possess supreme self-confidence, faith in your technique, and an ability to focus completely on the point at hand, rather than the score. Djokovic clearly has these qualities in spades, evidenced by the fact this was not the first – or the last – time he saved match points in this manner.

In fact, the one player he is beginning to resemble in this department is Serena Williams, another player vying for the title of history’s best player in the clutch. How many times have we seen the American rise from the depths of near-certain defeat to crush the spirits of her opponents while claiming ultimate glory?

Jon Wertheim of Sports Illustrated wrote of Serena Williams in 2010: “No one could come up with a single word that adequately captured Serena Williams’s almost pathological refusal to lose. The fallback clichés—tenacious, persistent, dogged—don’t come close to doing it justice. For all of Williams’s power and athleticism, it’s her … well, whatever word best depicts her will to win… that is her true gift … Anything to avoid leaving the court a loser. Her secret? She shrugs. ‘If I lose,’ she said, ‘I’m going out hard.’”

It seems the Serb has increasingly adopted the same mentality. And it’s helping him to cement a legacy as one of the best competitors in tennis history. When the chips are down, Djokovic is the man.