Juan Martin del Potro, Lleyton Hewitt, Kei Nishikori and Marcos Baghdatis will be among the eight-man field for the 2013 AAMI Classic at Kooyong. 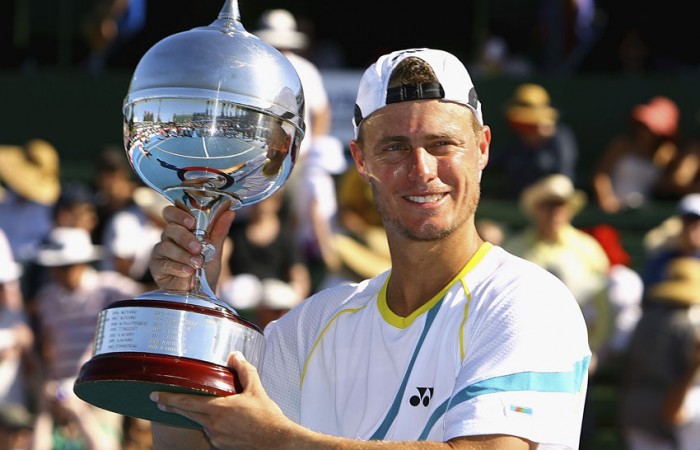 Juan Martin del Potro, Lleyton Hewitt, Kei Nishikori and Marcos Baghdatis have been confirmed as the first players among the eight-man field for the 2013 AAMI Classic at Kooyong Lawn Tennis Club in Melbourne.

The event, celebrating its 25th year, is a key lead-in event for the Australian Open and guarantees players a minimum of three matches ahead of the year’s first Grand Slam.

Tournament director Colin Stubs today announced the signing of the four players, a combination of youth and experience and all expected to boost the excitement and prestige of the event.

“We are delighted with our player commitments thus far and look forward to celebrating our 25th anniversary by staging a sensational event, jam-packed with great tennis, great entertainment and initiatives such as ‘Kids Day’ on the Friday,” he said.

World No.7 and 2009 US Open champion del Potro has a career high ranking of No.4 and 11 titles to his name, two achieved earlier this year in Estoril and Marseille.

He also won Olympic singles bronze at the London 2012 Olympics and was a finalist in Rotterdam, semifinalist in Dubai, Cincinnati and Madrid and a quarterfinalist at the Australian, French and US Opens.

Hewitt returns to Kooyong after winning the event in 2011. The 31-year-old has amassed 28 career titles, including Wimbledon and the US Open, and a stellar Davis Cup resume.

In 2012, the gritty competitor reached the final in Newport, losing to American No. 1 John Isner, and reached the fourth round at the Australian Open and last 32 in New York.

Nishikori, who at age 22 is the highest-ranked Japanese male in the Open era, reached a best-ever ranking of No.15 earlier this month when he clinched the title at his home event in Tokyo. The tee-totaller amused his adoring fans at the trophy presentation (which included a sponsor’s bonus) by saying: “I don’t know what I’m going to do with a year’s worth of Corona beer – I don’t even like beer.”

This season he has made the semifinals in Kuala Lumpur and quarterfinals at the Australian Open, London Olympics and in Newport, Barcelona, and Buenos Aires.

Baghdatis, Australia’s favourite Cypriot, obviously enjoys his Kooyong preparation – he is returning for the fourth time.

He has had a recent surge of form, having reached the semifinals in Tokyo – losing to eventual winner Nishikori – and showing great fighting spirit to make the third round in Shanghai last week after upsetting Milos Raonic in the second round.

Fans at Kooyong can look forward to a potential Baghdatis versus Hewitt re-match, after their epic encounter at Australian Open 2008 which extended to five sets and ended at 4.34am.

Tickets are now on sale at Ticketmaster. Call 136 100 or visit www.ticketmaster.com.au.