Stosur through to Osaka semis

Top seed Sam Stosur cruised into the semifinals of the WTA event in Osaka on Friday, beating American Jamie Hampton 6-2 6-4. 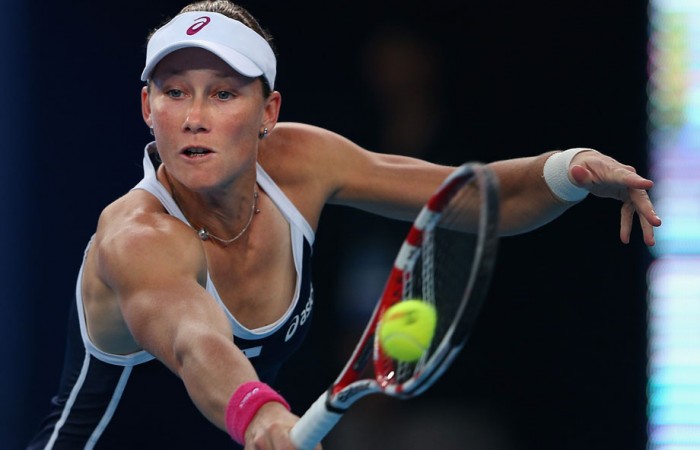 Top seed Sam Stosur cruised into the semifinals of the WTA event in Osaka on Friday, beating American Jamie Hampton 6-2 6-4.

The Australian, ranked ninth in the world, broke her unseeded opponent twice in the first set and once more in the second, never facing a break point on her own serve as she sealed victory in an hour and four minutes.

She will face unseeded Kai-Chen Chang of Taiwan who edged out eighth seed Laura Robson as Britain’s two quarterfinalists had contrasting results.

Robson dropped her serve twice as she lost her first set to the world number 134, but battled back to win the second and level the match.

The third set went with serve all the way, with not even a break point for either player, but Chang took the deciding tiebreak to complete a 6-4 3-6 7-6(4) win.

That left Heather Watson to fly the British flag after overcoming France’s Pauline Parmentier – ranked two places below her at 73rd in the world – in two sets lasting almost two hours.

The match featured 12 breaks of serve in 21 games, with the Guernsey player grabbing her fourth late in the first set and adding three more in the second as she wrapped up a 7-5 6-3 win.

Misaki Doi ensured a Japanese presence in the semifinals, and a clash with 20-year-old Watson, after winning 2-6 6-1 6-3 against seventh seed Chanelle Scheepers of South Africa.