Bernard Tomic admitted the pressures of the tour are taking their toll after a loss at the Shanghai Masters, where Lleyton Hewitt and Marinko Matosevic also fell. 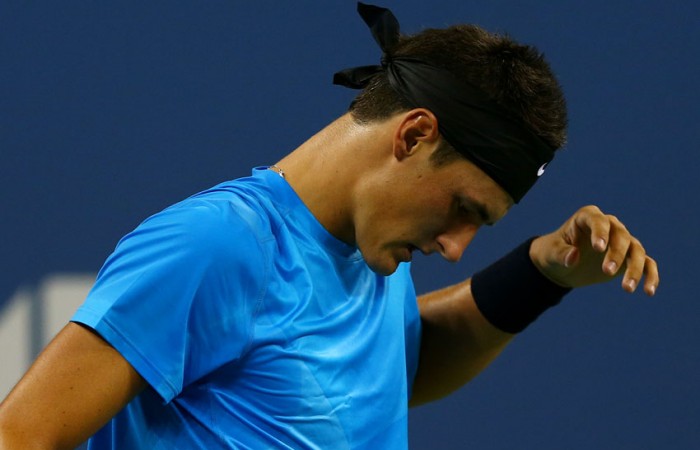 Australian teenager Bernard Tomic admitted giving only “85 per cent” as he joined compatriots Lleyton Hewitt and Marinko Matosevic in going down in the opening round of the Shanghai Masters.

Hewitt started strongly before losing 7-5 6-1 to Czech Radek Stepanek, but his second set fade out had nothing on that of Tomic.

Tomic admitted the pressures of the tennis tour were taking their toll, the 19-year-old winning just eight points in a miserable second set as he went down 6-4 6-0 to Germany’s Florian Mayer.

On Tuesday the Australian, who stands six feet five inches (196 centimetres) tall, admitted he was having problems with the mental side of his game as he adjusted to life on the gruelling tennis tour.

Tomic explained: “Today I gave 100 per cent in the first set. I felt in the second set, my 100 per cent wasn’t even close to where it should be … the mental skill is one of my biggest problems.”

Tomic, who has slipped to 43rd in the rankings after hitting a career-high of No.27, said it had been tough-going in 2012 after a breakthrough year in 2011 during which he reached the Wimbledon quarterfinals.

“It’s been a long year. I played a lot of tournaments. Haven’t had time to rest. I think I only rested one week after Roland Garros,” the soon-to-be 20-year-old said.

“I think it was the wrong sort of move that I made. I think it’s costing me now, the last few months. My performance has not been as good.

“It’s been a massive road this year. I didn’t plan my schedule as I should have and it’s cost me a lot of matches that I probably should have won.”

Mayer, who will next play US Open champion Andy Murray, said he was surprised at how easily Tomic had folded in the second set.

“Of course, second set we don’t have to talk about it, he probably didn’t try his best, but I’m happy, easy match, not too long on the court,” he said.

“In sports you want everybody to fight,” he added. “But it’s tough, I know it from my side. I also don’t fight every match because it’s tough, but I try my best.”