Hewitt and Stosur to play Brisbane

Australian favourites Samantha Stosur and Lleyton Hewitt have today confirmed that they will start their 2013 season in Queensland at the Brisbane International presented by Suncorp. 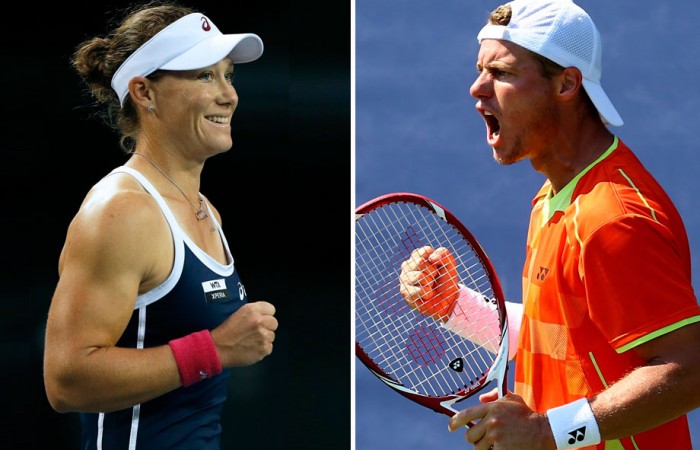 Australian favourites Samantha Stosur and Lleyton Hewitt have today confirmed that they will start their 2013 season in Queensland at the Brisbane International presented by Suncorp.

World No.9  Stosur is looking forward to playing in-front of her home crowd for the fourth time.

“It’s always fun to play at home. You don’t get many opportunities to play in your home country and the state that you’ve grown up in,” said Stosur, who captured the hearts of Australians last year when she defeated Serena Williams to win the 2011 US Open, her first Grand Slam singles title.

Stosur is looking forward to starting her year in Brisbane and sees the event as the best possible preparation for the Australian Open.

“I have had a couple of good wins at the Brisbane International, I would like more, so hopefully that will change in 2013,“ said the Queenslander.

“It is a good week and a great atmosphere playing at Pat Rafter Arena … the bigger the tournament has got the bigger the names that want to come out and play.  What better preparation than playing the best players in the world straight up,” Stosur added.

For Hewitt this will be his first appearance at the Brisbane International.

“I love playing the Australian tournaments and I have heard so many good things about the tournament … I am looking forward to kicking off the New Year there,” said the 31-year-old, who is working closely with Australian Tennis legend and Davis Cup coach Tony Roche.

In 2012 Hewitt has enjoyed some solid performances after returning from injury, reaching the fourth round of the Australian Open, final of Newport, third round of London 2012 Olympic Games for singles and the mixed doubles semifinal with Stosur.

“It’s always a tough field [in Brisbane] … so there will  be a lot of tough matches and I want to get as many tough matches as possible,” Hewitt expressed.

“The facilities are fantastic … I enjoy going up there to Queensland, normally the weather is extremely nice – especially at that time of year,” the former world No. 1 added.

“Having Australia’s only current playing Grand Slam champions compete in Brisbane will no doubt give the fans plenty to cheer for and it again demonstrates the enormous appeal of Brisbane to provide the best preparation leading into the Australian Open,” Pearson continued.

“To have two of Australia’s tennis heroes compete at the Brisbane International is great news for Queensland fans,” said Ms Stuckey.

“The Brisbane International is a great event on Queensland’s calendar, last year attracting a record 92,802 attendees.

“Events like this are a major contributor to the state’s economy, playing an important role in the Newman Government’s goal to double overnight visitor expenditure to $30 billion by 2020.”

In 2012 the ATP recognised the Brisbane International for providing the best fan experience of any tournament throughout Asia / Pacific and Middle East.

Brisbane International 2013, presented by Suncorp and supported by Events Queensland, will take place at the Queensland Tennis Centre, Brisbane, from 30 December 2012 to 6 January 2013.

From tomorrow, Wednesday 10 October 2012, at 9:00 am (AEST), Brisbane International 2013 single tickets plus series packages will be available.