Novak Djokovic and Victoria Azarenka claimed the honours at the ATP and WTA China Open events, whiole Kei Nishikori created history with his win in Japan. 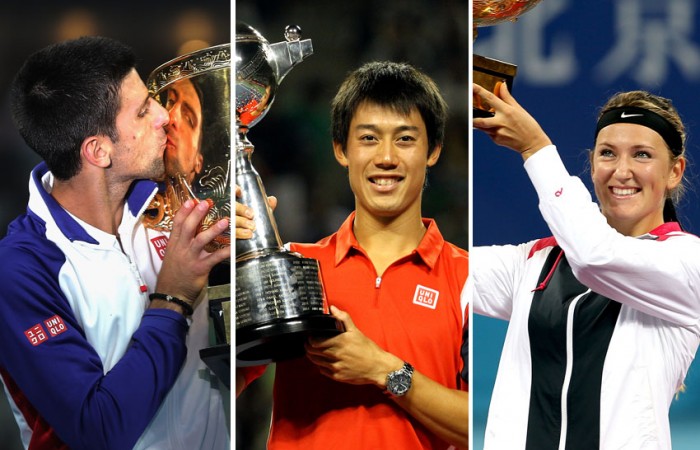 World No.2 Novak Djokovic overcame Jo-Wilfried Tsonga in straight sets on Sunday to win the China Open for a third time.

Djokovic has won the China Open every time he has entered, his previous titles coming in 2009 and 2010 before he missed last year because of injury, and his record at the tournament now stands at 14-0.

He is pressing to beat Roger Federer to the year-end No.1 spot in the world rankings and said he was “delighted” at his latest triumph.

“It’s an amazing feeling to win this trophy in the new stadium,” he said of the capital’s National Tennis Stadium, which had yet to be built the last time he won in Beijing.

Little separated the players throughout the entire opening set. The first four games went to serve before Tsonga made a breakthrough in the fifth game, breaking Djokovic without losing a point.

But the Serb immediately broke back and the next six games went with serve to force a tiebreak, where Djokovic raced to a 4-1 lead.

But two mistakes from the Frenchman, including a backhand half volley into the net, gave the tie break and set to Djokovic.

The first two service games of the second set were held before Djokovic broke in the third and was spurred on to take the next two games, establishing a 4-1 lead, then came from behind to hold serve in the sixth.

Tsonga held in the seventh before Djokovic did the same to take the set and the match in one hour and 41 minutes.

The Belarusian dispatched Sharapova, ranked second in the world, 6-3 6-1 in the final of the tournament held in the nation’s capital.

Azarenka, 23, sped to a 4-0 lead in the first set against the French Open champion, breaking her opponent’s serve twice and holding her own on both occasions.

Sharapova, 25, won her first game in the fifth, before Australian Open champion Azarenka continued her 100 percent service game in the sixth.

The Russian responded by upping her serving and return shorts, winning two games in a row, but it was too little too late as Azarenka broke Sharapova in the final game to win the set 6-3 in 43 minutes.

Azarenka continued her momentum into the second set, again winning the first four games with ease.

The tennis star from Belarus then came from behind to hold her serve in a lengthy fifth game to make it 5-0 before Sharapova scraped a game, following an 18-shot rally.

With Azarenka serving for the match Sharapova had two break points at advantage but the Russian was unable to convert. Azarenka then squandered a match point before finally taking the game and set to record a big win.

It was her first China Open title in four attempts and her fifth tournament triumph of the season.

“I’m really happy to have a good result because I’ve been coming here the last four years,” Azarenka said, praising the “incredible atmosphere” inside the capital’s National Tennis Stadium.

Sharapova was full of praise for her opponent.

“Victoria played an amazing match today,” she said. “There’s a reason she is number one in the world right now.”

Across in Japan, Kei Nishikori made history as the first Japanese to win the Japan Open tennis tournament with victory over young Canadian star Milos Raonic in the final.

The 22-year-old, who eliminated world No.6 Tomas Berdych of the Czech Republic in the quarterfinals, pulverised Raonic’s serve-and-volley game to score a 7-6(5) 3-6 6-0 victory in his fourth career final on the tour.

“I can’t believe it,” said a jubilant Nishikori.

He was the first player from the host nation to win the Japan Open since it was sanctioned by the ATP in 1973.

“I knew he has a very good serve, so I tried to move a step forward. My return was working really well this week,” Nishikori said.

“I was able to cope with him using my returns … that was the key to the victory.

Raonic, who had lost only one service game in his previous four matches, lost another in the second game of the first set before breaking back in the fifth game.

Nishikori, missing two set points in the 12th game, stormed back from 0-3 down in the tie-breaker.

He scored his second mini-break to take a commanding 6-4 lead before taking the set when Raonic’s backhand shot went wide.

The Canadian managed to pull off the only break to tie the contest at one set all. But in the final set, Nishikori broke him in the second game and dominated the rest of the battle for a surprisingly lopsided scoreline.

It was only Nishikori’s second title, following his maiden victory at Delray Beach in February 2008 when he become the second Japanese man to win a tour title.