Novak Djokovic kept alive his quest to finish 2012 as world No.1 by dismissing Florian Mayer in the China Open semis, setting up a final with Jo-Wilfried Tsonga. 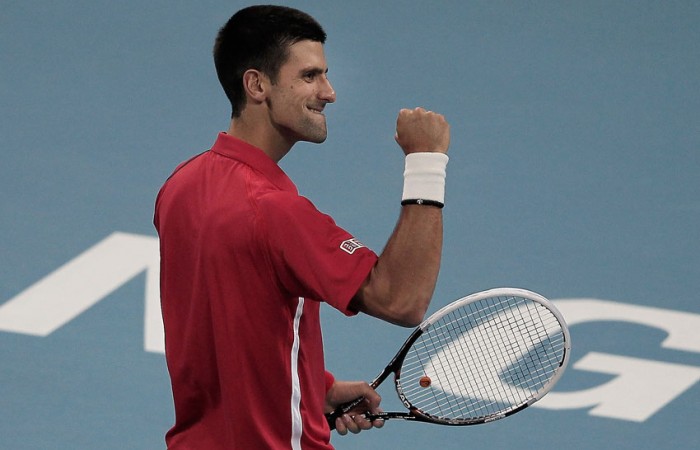 Novak Djokovic brushed aside Florian Mayer in the China Open on Saturday to set up a final against Jo-Wilfried Tsonga.

The world No.2 from Serbia furthered his aim of finishing the year atop the ATP rankings with a simple straight-sets victory, maintaining his unbeaten record at the Beijing tournament which stretches back three years.

The 25-year-old, second to Roger Federer in the rankings, has won the China Open on the two occasions he has entered — in 2009 and 2010 — and will aim to make out three out of three against France’s Tsonga on Sunday.

Tsonga marched into the final when Spain’s Feliciano Lopez retired during the second set of their match.

The world No.7 thrashed Lopez 6-1 in the first set and was 4-1 up in the second when the left-handed Spaniard called it a day, citing an injury to his left wrist.

“I played really well and I felt really good on the court,” Tsonga said.

“I didn’t know before he was a bit injured. I’m just happy today with my game.”

The Frenchman has enjoyed an easy progression to the final of the Beijing tournament since needing three sets to overcome Uzbekistan’s Denis Istomin in the first round.

The 27-year-old received a walkover in the second round after Nikolay Davydenko withdrew and beat Russia’s Mikhail Youzhny in straight sets in the quarterfinals.

“During this week my level has got better and better,” Tsonga said.

“I have played maybe some of my best tennis here. I haven’t played like this in couple of months and maybe a couple of years now and that’s why I think I can win the final tomorrow.”