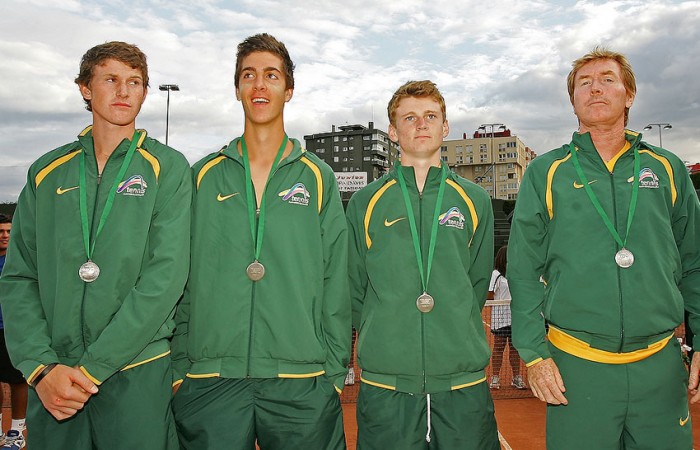 Bourchier got the team off to a flying start when he defeated Filippo Baldi in three long sets 4-6 7-6(2) 10-8. The pair were locked in an epic battle that lasted three hours and six minutes.

With fatigue setting in, it wasn’t until the 17th game of the super tiebreaker that Bourchier was given the opportunity to serve for the match at 9-8. The Tasmanian finally secured the match after two match points when Baldi’s backhand found the net.

Kokkinakis then faced the tournament’s top-ranked player and world No.4 junior Gianluigi Quinzi. Kokkinakis won the second set before Quinzi outpowered Australia’s No.1 player to defeat him 6-1 0-6 6-3.

The title was decided in the final doubles rubber where Baldi and Quinzi eventually prevailed over Bourchier and Kokkinakis 6-0 3-6 6-2.

Earlier in the week, the Australians dismissed top seeds USA in the semifinals after defeating Spain, Morocco and No.6 seeds Argentina in the round-robin stage.

The team lost their bout to retain the girls’ title when they lost to the second-seeded Russian team 0-2 in the semis on Friday.

The tie, like the boys, was decided in the doubles. Naiktha Bains and Wallace fought hard but the Brazilian pair of Maia and Alves prevailed to win the bronze medal 4-6 6-3 6-2.

“The girls gave everything they had this week and they should be proud of finishing fourth,” said captain Nicole Pratt.

“They have improved, no question. This is Zoe’s first trip to Europe so for her to win four out of five matches was a fantastic achievement. Playing on clay requires patience and good decision making and that is an area the girls definitely improved upon.

“You can not put a value on this experience as they are being exposed to their world peers, the best of the best are here. They have learned many lessons both on and off the court and I hope that they take some of these lessons and execute further success in the future.”

Though they were tired after the week, the girls were pleased with what they accomplished.

“We are all tired as it’s been a big week of tennis but overall we’re happy with what we have achieved,” said Hives.

“Of course we would have liked to have done better. We were the defending champions and we thought we could win the entire event. However there were very tough teams from all over the world ,” added Bains.

Junior Davis and Junior Fed Cup by BNP Paribas is a prestigious international team event for boys and girls aged 16 and under.