UPDATE: An abdominal injury did not help Sam Stosur's performance as she fell to a 6-4 6-2 defeat to Nadia Petrova in the Pan Pacific Open quarterfinals. 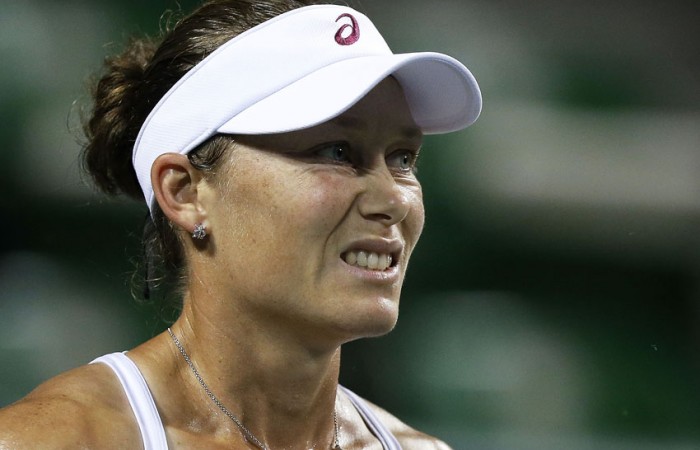 Nadia Petrova of Russia overpowered Australia’s Sam Stosur 6-4 6-2 on Friday to advance to the final of the WTA Pan Pacific Open.

Petrova set the pace early when she broke the Stosur in the first game en route to the semifinal victory at Tokyo’s Ariake Coliseum.

Petrova’s serve was the key to the win, as she pounded nine aces (while committing no double faults), won 85 per cent of first serve points and prevented Stosur converting any of her three break point opportunities.

Any chance for a comeback by Stosur was dashed when Petrova broke the No.8 seed in the seventh game of second set to go up 5-2.

“When I arrived here, I wasn’t sure if I was going to be able to play at all because I didn’t feel well,” Petrova said. “But I got stronger and stronger with every match and am happy to be in the final.”

Stosur, who upset second-seeded Maria Sharapova in the quarterfinals on Thursday, suffered an abdominal injury in Friday’s match.

“I did something to myself in the third game of the match,” Stosur said.

“I kept thinking it would go away but it didn’t seem to. I got some treatment for it and was able to keep playing but it’s not the ideal situation.”

It was an unfortunate end to the Australian’s Tokyo campaign after the confidence boost she gained from defeating Sharapova for just the second time in 12 matches.

Yet Petrova, a former world No.3 and a dangerous opponent when her game comes together, has always performed well against Stosur, and is in the midst of a rich vein of recent form.