Australia's Junior Davis and Fed Cup teams won their final round-robin matches to progress to the semifinals of the world finals in Barcelona. 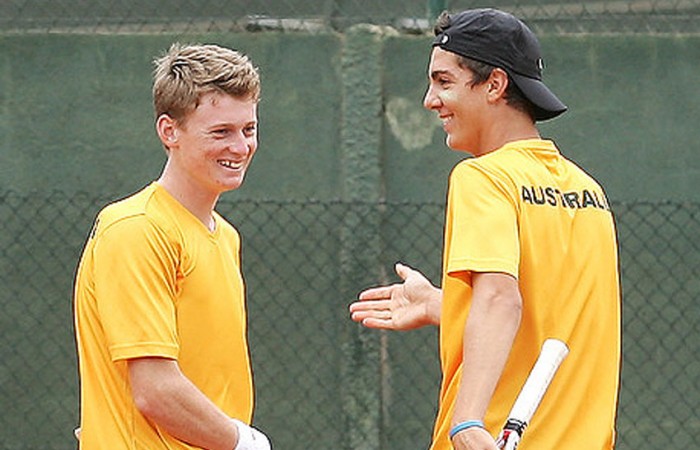 Australia’s boys’ and girls’ teams have advanced to the semifinals of the Junior Davis and Fed Cup by BNP Paribas world finals after emphatic wins overnight in Barcelona, Spain.

Hives took the first rubber against Latvia’s number two player Darte Elizabete Emulina 6-1 6-3, after being down 1-3 in the second set.

Wallace, who played the match of her life, then won the second singles rubber against Jelena Ostapenko 6-3 6-4, giving the team a fantastic chance to make it to the next round.

“I thought Isabelle would have to play some of her best tennis to win and that is exactly what she did,” said Junior Fed Cup captain Nicole Pratt.

“Her forehand was exceptional, hitting winners down the line in critical moments. I was impressed how she kept it together emotionally through the entire match. It was definitely the best match I have seen Isabelle play and she deserved the victory.”

Australia and Paraguay finished in equal first place at the top of Group C. As Australia had defeated Paraguay during the round-robin, Australia progresses to the semifinals.

“It’s a huge bonus that we are through to the semifinals.  We started the day knowing that we could either be playing for positions 1-4, 5-8, 9-12 or 13-16 given that all teams had beaten each other in our pool. We had to beat Latvia, and Paraguay had to beat Mexico to go through and that is how it unfolded,” added Pratt.

“The girls will be firing now knowing they still have a chance to bring the cup back to Australia.”

The girls will play second seeds Russia next for a chance to play off for the cup won by Ashleigh Barty, Brooke Rischbieth and Belinda Woolcock in 2011.

Thanasi Kokkinakis (Seacombe Heights, SA) notched his third consecutive singles win for the week with a straight sets victory over Francisco Bahamonde after Harry Bourchier (Kingston, Tas) started the day with a 5-7 7-6(6) 6-3 win over Lautaro Pane.

Earlier in the week, the boys’ posted wins over Morocco 3-0 and Spain 2-1.

The No.3 seeds will now face top seeds USA for a place in the finals.