Stosur through to Tokyo quarters 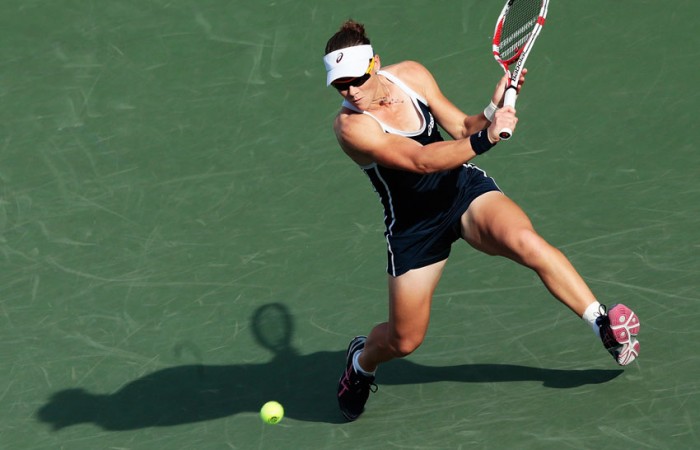 Sam Stosur has defeated 12th seed Dominika Cibulkova in straight sets to progress to the quarterfinals of the Toray Pan Pacific Open in Tokyo, Japan.

Stosur required one hour and 35 minutes to see off the Slovakian’s challenge, winning 6-4 7-5 to set up a final eight showdown with Maria Sharapova.

“She’s one of the players I’ve struggled with in the past and only beaten her once, so it is always a really good challenge to play her,” Stosur said of Sharapova.

Their match is scheduled to take place place third up at Tokyo’s Ariake Coliseum on Thursday.

Stosur required just one service break to pocket the opening set, helped also by some stellar serving – she landed 86 per cent of first serves, smacked five aces and saved both break points she faced.

The second set was a tighter affair, with Stosur gaining the early break only for Cibulkova to snatch it back.

Yet the No.8 seed again prevailed with her returns, breaking serve again and eventually sealing her third win in three career meetings with the Slovakian.

It was a much cleaner display from Stosur – exemplified by her nine aces to three double faults – after struggling to get past Francesca Schiavone in her opening match, a battle that lasted more than two-and-a-half hours.

“It’s nice to be winning some matches here in Tokyo again. The last couple of years here I’ve struggled and lost my opening matches, so to come back here this year and win two matches against two good players (Schiavone, Cibulkova) is really satisfying,” Stosur said.

“Today I thought I played really quite well, so I’m looking forward to the next one.”

On a side note, Stosur’s chances for qualification at the eight-player WTA Championships received a boost after Li Na fell in the second round in Tokyo.

Li, who sits one place above Stosur in the Race to the WTA Championships at eighth position, went down in three sets to Caroline Wozniacki on Wednesday.