Roger Federer has come closer to tennis perfection than any player that’s graced centre court - it's why Suzi Petkovski ranks him as the greatest ever. 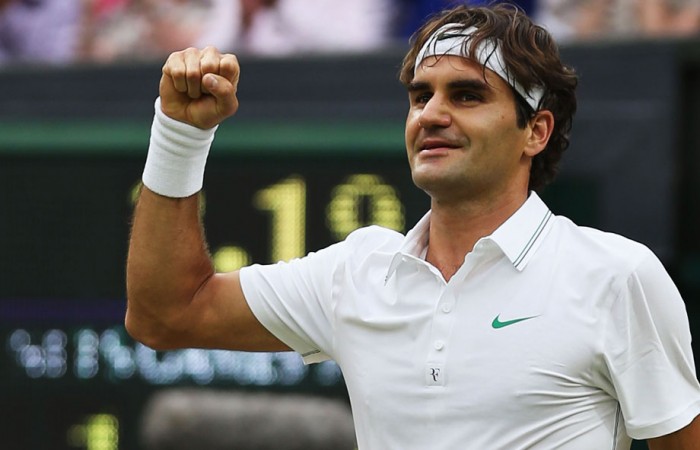 Roger Federer has come closer to tennis perfection than any player that’s graced centre court and while he can’t boast a calendar-year Grand Slam, he’s amassed many other records that are unsurpassed. SUZI PETKOVSKI ranks the Swiss star as the greatest ever.

Rod Laver and Roger Federer have such respect and genuine affection for one another – who can forget Federer dissolving into tears when Laver presented him with the Australian Open trophy in 2006? – that neither would begrudge the other the Greatest of All Time (GOAT) gong. Nor would their legion of fans. Both have enriched the game more than they have enriched themselves. But there are no draws in tennis, even for the title of all-time greatness. From my privileged courtside seat, the Fed Express just pips the Rockhampton Rocket.

GOAT debates are as futile as they are fun. Futile because past and present legends can never face-off in their glorious, youthful pomp to settle the argument. And such has been the transformation of tennis that Laver and Federer barely played the same game.

For much of Laver’s career, ‘tennis pro’ was a term of abuse. Three of the four Grand Slams were played on grass. Laver wielded a wood racquet, his iron left wrist wrapped around a leather grip of almost five inches. Federer’s Wilson weapon would feel like a feather duster in comparison, and the grip – at four-and-three-eighths – uncomfortably small. Racquet and string technology has radically altered not just the range of strokes available to the modern player, but flipped the percentages in favour of the defender/counterpuncher. Direct comparison is impossible not least because of tennis politics. Laver lost five prime years (1963-67) as a pariah pro. He racked up 11 majors from 17 finals. How many more would the Rocket have claimed had he not been banished from 21 Grand Slams?

Yet the great unanswerable question is also irresistible for tennis tragics. The more we shade in the context of each champion’s career, the more we compare records and eras, and the more we appreciate past greats. The miracle of YouTube allows us to gape in wonder at clash-of-eras footage like that of a 38-year-old Laver facing young buck Bjorn Borg, on picturesque American green clay in 1976. The only thing more eye-popping than Laver’s orange shorts is his spectacular play. Even this snippet of glorious action – albeit years past Laver’s peak – makes us less certain about anointing The Greatest. Still, I would give the edge to Federer.

Laver’s ace is his unique feat of dual Grand Slams in 1962 and 1969, as an amateur and a pro. Federer’s GOAT approach shot is his record haul of 17 majors, well ahead of the Rocket’s 11. Neither feat is conclusive. Sure, the five-year gap in Laver’s record serves up a lot of ‘what ifs’, while Federer’s record is indisputable. But tennis isn’t accounting. Conversely, Federer’s inability to land the Grand Slam doesn’t automatically preclude him from greatest-ever honours.

But the weight of numbers are with the Swiss master. Federer’s breakthrough Slam at Wimbledon 2003 launched the most dominant run in the game’s history. No one has been a finals fixture at all four majors like Federer. The only man to play finals at all the Slams at least five times, the Swiss virtuoso is 4-1 at Melbourne Park, 1-4 at Roland Garros, 7-1 at Wimbledon and 5-1 at the US Open, for a 17-6 record. Laver’s least successful Slam venue was Roland Garros, where he won two of three finals and didn’t have to contend with clay-court monsters like Borg and Rafael Nadal.

Laver began with a 1-4 record in major finals; Federer streaked to an unprecedented 7-0 run until Nadal beat him in the 2006 French Open. John Newcombe, John McEnroe and Mats Wilander all won seven majors over their storied careers; Federer did it in less than three years.

Beyond the title wins, Federer also owns the longest Grand Slam streaks. Many former champions can’t see anyone breaking Federer’s record 10 consecutive Grand Slam finals, from Wimbledon 2005 to the US Open 2007. For some, the most impressive record is his 23 consecutive majors as a semifinalist or better (Laver and Ivan Lendl are next, with 10). Federer’s record 30 consecutive majors as quarterfinalist or better is a live streak.

The Swiss star’s consistency in the big events is unmatched – all the more remarkable given the modern era’s geographic spread of top players, four distinct surfaces at the Grand Slams, and 128-player draws. Laver won five matches in each of his Australian title runs; Federer has to survive seven opponents.

Like Laver, Federer’s brilliance has endured into his 30s. Wimbledon delivered his 17th Slam and the No.1 ranking, extending his reign to a record 295 weeks (and counting). At 31, Roger has every tennis record that matters. And he’s not done yet.

Federer’s name is a byword for perfection. As his fans like to highlight in banners draped on stadiums around the world, the middle letters in ‘perfect’ are RF, Federer’s initials. The Swiss superstar has come closer to tennis perfection than any player to grace centre court.