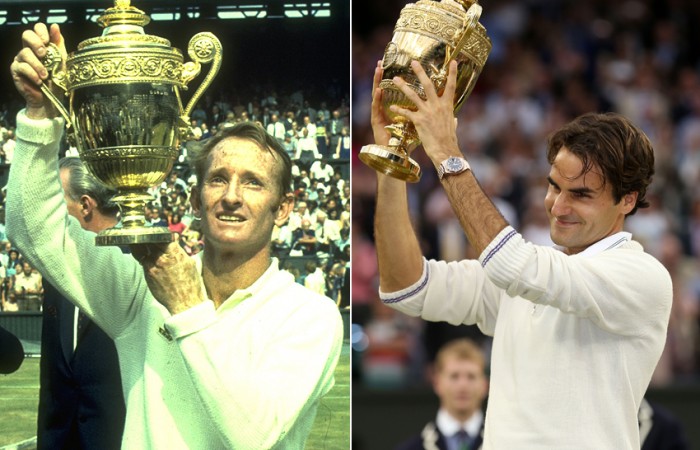 In this edition of Talking Point, we examine the difficulties in comparing players from different eras and how the pioneering efforts of players such as Rod Laver helped pave the way for the opportunities someone like Roger Federer enjoys today.

All this GOAT talk understandably lends itself to other considerations. Surfaces, racquets, strings and naturally-evolving styles are all up for debate in the comparisons of Rod Laver, a lean but sinewy left-hander who dominated several decades ago and Roger Federer, the crafty right-hander who is still achieving so much today. Some of those conversations are contemplative, others are passionate and all of them highlight the fact that while it’s shaped by tradition, tennis is also defined by change.

One of the biggest of those changes is the birth of the Open Era in 1968. Until then, the game existed in a curiously fractured state in which players could chose one form of tennis or another. Those who retained amateur status could contest Grand Slams but earning a living generally depended on under-the-table reimbursements for “expenses”. Others who turned professional earned a transparent and comparatively lucrative living but surrendered their opportunity to compete in the majors.

For those considering how to Vote 4 the GOAT – and let’s be honest, choosing between Rod Laver and Roger Federer is always going to be a tough decision – the associated complexity is the Australian’s “lost years” between 1963 and 1967. Having turned professional after claiming the first of his two calendar-year Grand Slams in 1962, Laver signed a contract with promoter Jack Kramer. Worth a reported $100,000 it eliminated the need to supplement tennis with a second job, as often occurred at the time, but also made him ineligible to compete in the next 21 major events. His 11 Grand Slam titles pale alongside Federer’s 17, but it’s hardly a true comparison.

Not that Laver, ever the respectful gentleman, would complain.

“I had no regrets turning professional … Back in the amateur days, you (couldn’t) do much with trophies,” he commented in 2006, explaining that the similarly-talented Ken Rosewall and Lew Hoad, who’d already joined the professionals travelling America to compete in one-night events played on a canvas court, had encouraged the transition. “That was a challenge for me. The best players were pros, and that was something for me to enjoy.”

More significant was the fact that while Laver and his contemporaries were appreciating those rewards, they were also establishing a pathway that would benefit the generations who followed.

The push for professionalism eventually lead to the creation of a unified tour; after the birth of the Open Era in 1968, players competed on a Grand Prix circuit before leading players joined forces to create the Association of Tennis Professionals, or the ATP World Tour as it’s known today. Alongside the more even playing-field was the chance for more players to make their living from tennis.

Those pioneering types were also influential in the women’s game. In 1970, Billie Jean King led a group of nine women who, frustrated by the significant disparity in men’s and women’s prizemoney, contested a breakaway tournament at the Houston Racquet Club. It resulted in the creation of a series of tournaments under the Virginia Slims banner and ultimately, the establishment of the Women’s Tennis Association (WTA). Few understand the bravery that was required as those players took those important early steps towards parity.

It’s a reminder that tennis’ history will always be a part of its future. And while GOAT debates will continue for as long as tennis is played, nobody can argue the legacy that the past champions of the game created for those who have followed.