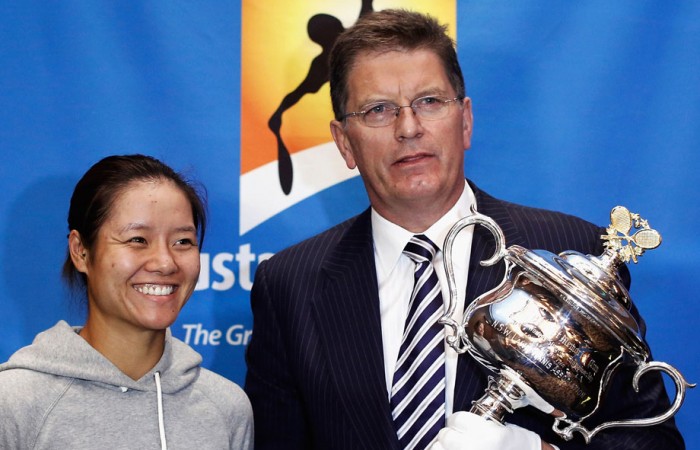 “Melbourne boasts a world-class events calendar and the Australian Open, Grand Slam of Asia-Pacific, is one of Victoria’s, and indeed Australia’s, most successful events and attracts thousands of visitors from Asia each year. The success of China’s home-grown champion, Li Na, continues to build interest and excitement for both the sport and the tournament.

“We are very pleased to have Grand Slam champion Li Na with us here today, along with the magnificent Australian Open women’s trophy, the Daphne Akhurst Memorial Cup. Li Na, we look forward to seeing you in Melbourne in January and wish you all the very best for Australian Open 2013,” Premier Baillieu continued.

Tennis Australia CEO Steve Wood outlined the importance of the Asia-Pacific region to the Australian Open, announcing a new exchange program with the China Open that will see six Chinese ballkids displaying their skills on court at the Australian Open.

“The Chinese Ballkid Exchange Program, the Asia-Pacific Wildcard Play-off and the Australian Open International Trophy Tour are all just part of our ongoing mission to promote and develop the sport of tennis in China and the Asia-Pacific region. We are also working closely with the China Tennis Association and I’d like to take this opportunity to thank them for their assistance with the delivery of the Wildcard Play-off tournament in Nanjing,” Steve Wood said.

“We appreciate the support of the Victorian government, not only for their assistance in promoting the event internationally, but for their long-term commitment to upgrading our home at Melbourne Park. The current $363 million redevelopment project will see the Australian Open lead the world in Grand Slam facilities, with three stadium courts featuring retractable roofs by 2015.

“More than half the Australian Open’s global media value is now generated from the Asia-Pacific region and new broadcast deals include access to an additional 65 million homes.”

“And when Li Na made her historic run to the final in 2011 we achieved the highest ever broadcast exposure throughout Asia, and China in particular, with 135 million tuning in across the region,” Wood continued.

“The Crown Melbourne integrated resort features three world-class hotels, over 40 premium and casual restaurants, a luxury retail precinct and a wide range of entertainment to choose from 24 hours a day. Crown looks forward to welcoming the winners and providing them with the best possible accommodation experience for the duration of their stay in Melbourne. Crown is also extremely proud to sponsor the great Li Na and awaits her highly anticipated return to Melbourne and Crown this summer for the Australian Open,” Hawkins continued.