Australia has fallen 3-2 in the Davis Cup World Group Play-off following losses to both Bernard Tomic and Lleyton Hewitt on the final day's play. 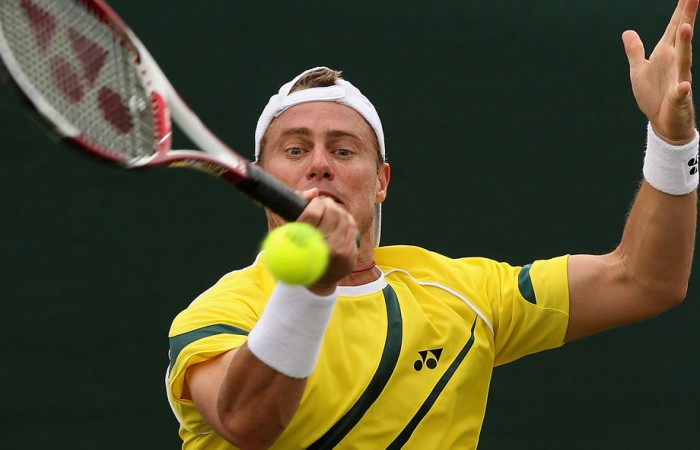 Australia has fallen 3-2 in the Davis Cup World Group Play-off following losses to both Bernard Tomic and Lleyton Hewitt on the final day’s play.

Hewitt, the nation’s greatest Davis Cup servant, succumbed to German world No.127 Cedrik-Marcel Stebe 6-4 6-1 6-4 in a flat, error-filled performance in the deciding rubber in Hamburg.

Even one of his greatest fans, former Davis Cup captain John Fitzgerald wondered how much longer the former world No.1 would carry on.

The 3-2 defeat on clay condemned Australia to the Davis Cup’s second tier for a sixth straight season.

That Australia let slip a 2-1 lead in a World Group Play-off for a third-straight year only added to the pain after Bernard Tomic was earlier wiped off the clay court by Florian Mayer, also in straight sets, 6-4 6-2 6-3.

The thought of fighting through regional qualifying one more time is hardly an appetising prospect.

Rafter admitted it had been a gamble to pick his great mate Hewitt with the scores locked at 2-2.

“I was a little worried after the doubles match how much energy Lleyton used out there,” Rafter said.

“It is very hard to come out and play singles the next day.

“But we had to roll the dice and the Germans are a very good team.

“We had to take chances somewhere along the line and unfortunately it bit us a bit.”

Asked about his future, Hewitt said his attention would turn to the Australian summer.

He must want to delete his straight-set losses to Mayer and Stebe from his memory so soon after his encouraging performances at the US Open.

The left-handed Stebe is Germany’s 11th highest ranked singles player and was going to be dropped following Friday’s four-set defeat to Tomic.

Only an injury to Philipp Petzschner in Saturday’s doubles and Benjamin Becker’s horrible form in the middle rubber handed him the chance to be a national saviour.

Former Wimbledon and US Open champion Hewitt led 3-0 earlier in the match before tightening up and losing 11 of 12 games to Stebe, who enjoys clay better than any other surface.

Hewitt, 31, said he found it more difficult to back up these days.

“It does not get any easier,” he said.

Germany defeated Australia 3-2 and will play in the World Group in 2013. Australia will remain in the Asia-Oceania zone in 2013.