The lethal combination of Lleyton Hewitt and Chris Guccione has put the Australian Davis Cup team just one win away from a spot in the top-flight next year. 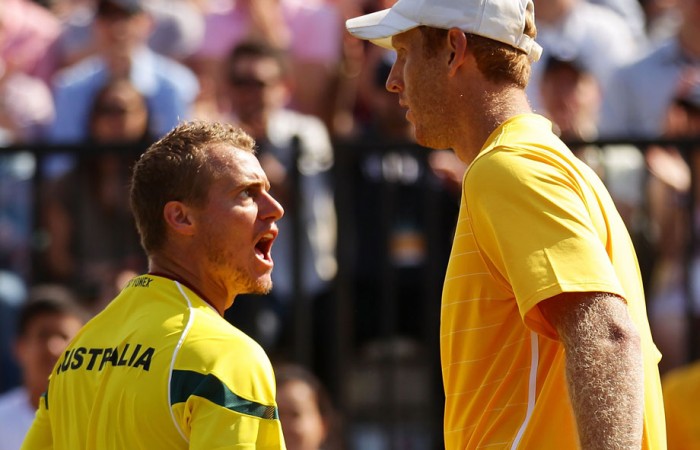 The lethal combination of Lleyton Hewitt and Chris Guccione has put the Australian Davis Cup team just one win away from a spot in the top-flight next year.

The undefeated pair accounted for Germany’s Philipp Petzschner and Benjamin Becker 6-3 6-2 2-6 7-6(4) at Rothenbaum Stadium to hand Australia a 2-1 lead.

Bernard Tomic takes on Florian Mayer at 11.30 am (19.30 pm AEST) in the opening match of Sunday’s reverse singles with Petzschner expected to replace Cedrik-Marcel Stebe as Hewitt’s opponent later on.

> Watch the play-off live on 7TWO

> Photos: the moments that have mattered

Australia must win one of the two singles rubbers to return to the elite World Group for the first time since 2007, having lost play-off ties in four of the past five years.

World No.25 Mayer was in outstanding form on the opening day, blitzing Hewitt in straight sets.

“He could come out and worry Mayer a lot, so we will wait and see.

The big red head was the only player not to drop serve in the two hour and 31 minute contest with Hewitt more than playing his part with his boundless energy and court craft.

After being hammered by Mayer on Friday, Hewitt was highly animated even by his standards and produced his trademark aggression as Australia dominated the early exchanges.

He roared “Come on” as early as the fourth game as the Australians piled the pressure on Becker in the German’s first Davis Cup doubles outing.

Becker’s serve crumbled and the visitors had raced out to a two-set lead just after the hour mark.

With a demolition on the cards, the home team lifted and broke Hewitt’s serve twice to force the match to a fourth set.

The Australians claimed an early break to stem the flow but at 4-3, the Germans peppered a Hewitt service game and eventually broke him on the seventh break point.

A tiebreak was required and the Australians prevailed with Hewitt jumping into Guccione’s arms after winning match point.

“The Germans were coming back at the boys and they showed really good fighting spirit,” Davis Cup captain Pat Rafter said.

“We were very happy it did not go into a fifth set.”

Hewitt, the veteran of the team, said he believed that he and Guccione could win the vital third rubber.

“When you can look your partner in the eye in the locker room and know you are going to be out there together and go into battle together, that’s something I have always enjoyed with Gooch,” said Hewitt.

Our game plan out there didn’t change the whole match, we had to dig a lot of volleys out, we had to be aggressive and we did that.”

Guccione now boasts a 7-0 doubles record in Davis Cup ties, something he puts down to representing his country.

“Playing for your country, [when you] put the green and gold on you represent your country it seems to bring out the best of me.”