In a huge boost for Australian tennis, Pat Rafter has committed long-term to the Davis Cup captaincy. 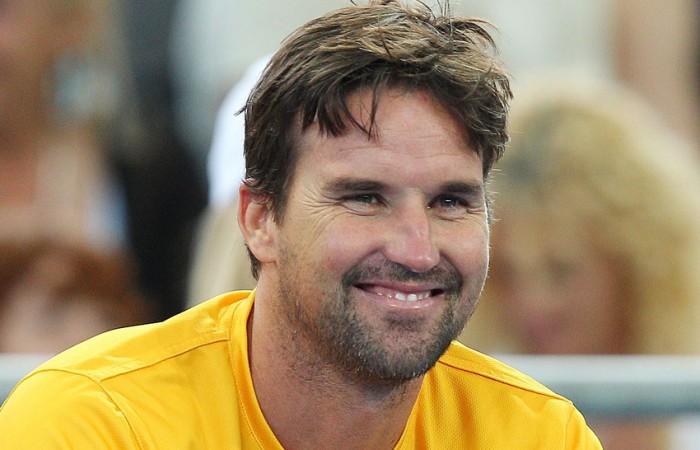 In a huge boost for Australian tennis, Pat Rafter has committed long-term to the Davis Cup captaincy.

Appointed in October 2010, Rafter took time to embrace the role, but now says he feels a duty to remain on board for the long haul.

“I’d like to think that I’ll do a few more years at least and we’ll evaluate it then because it takes a couple of years to actually establish yourself and get trust from the players and understand the guys,” Rafter told AAP ahead of Australia’s make-or-break World Group Play-off in Germany starting on Friday.

“It’s going to take a little bit and I think it requires a length of time for it to have any impact.”

A decade after retiring, Rafter remains among the most popular figures in Australian tennis, his public image second to none, and his pledge to stick around in an official capacity will be welcomed.

The Davis Cup captaincy has traditionally been one of the most coveted posts in Australian sport, with Rafter only the fifth man in the past 62 years to lead the 28-times champion nation.

As Rafter’s long-term future in the job previously remained uncertain, Newcombe has been among the most vocal advocates urging the dual grand slam champion to stay on.

Rafter played under Newcombe’s captaincy and still credits the Davis Cup for igniting his career. Most notably, Rafter’s recovery from two sets down against Frenchman Cedric Pioline at White City sparked the belief that helped the Queenslander win his first major at the 1997 US Open.

“A lot of the guys internationally think it doesn’t fit into their schedule, but I think it’s one of the most important things you can do,” he said.

“It’s a shame to see not everyone playing. It was a big part of my development, just being around all those guys. Every tie I learned and there was a certainly a turning point in 1997 against France.

“You learn a lot about yourself in Davis Cup and you do a lot of hard work – and I’m trying to get that across to the boys.”

Rafter admits being captain is “getting better” after he endured the disappointment of presiding over Australia’s 3-2 World Group playoff losses to Belgium in 2010 and to Roger Federer’s Switzerland last year.

“It’s been a really big learning curve for me,” he said.

“Coming to this US Open, I’m finding I’m sitting on the court watching the guys off the side actually visualising myself on the court with them and wondering what would I be saying to them in a situation.

“I’m talking to their coaches and understanding how their head space so I know how to interact with them, so I’m enjoying that aspect of it.

“With what we’re trying to create, and getting support across the board with Tennis Australia, I’m starting to feel like we are actually heading into a direction; whereas before I was sort of sitting back and finding my feet a little bit.

“Now I know where I want to go with the team and I’ve got support with that, I’m enjoying it more.”